IT GETS FATTER: NOTES FROM A FAT-POSITIVE, BODY-POSITIVE WORKSHOP 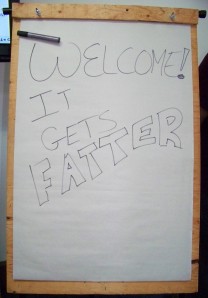 It Gets Fatter: Notes From A Fat-Positive, Body-Positive Workshop

Workshop by Sara M. and Asam Ahmad of the It Gets Fatter Project

Asam introduced himself and started with a question (Sara was running a little late):

What does fat mean as [to] a person of colour?

Asam mentioned the history of the group It Gets Fatter and their website: It Gets Fatter. He followed by talking about his history of having issues with his body and never seeing himself (a person of colour) represented in talks about fat positivity and combatting fat-phobia; because of this Asam talked of preference given to Indigenous Peoples, People of Colour, and women during the workshop.  Half the room was people of colour which had me feeling comfortable.

We did a check in to see how people were doing and then a go around to share names and preferred pronouns.

Asam asked, “How many people have heard of fat phobia? Can someone define it for me?”

Definition of fat phobia that we, the group, came up with: the fear and hatred and fat bodies.

Fat phobia is systemic.  Everyday you hear of how bodies are supposed to be.  Example: the size of airplane seats; TTC (transit) turn styles; clothes for bigger bodies being more expensive… 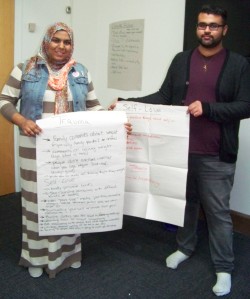 * Treat others how they want to be treated

* Everyone is an expert in their own lived experience.  Example: oppression is not transferable.

* Confidentiality: what you learn at the workshop can be shared but do not share peoples stories and names.

* Multiple Truths can exist in this room

* Recognize your identities and privileges (examples in the paragraph above)

* Self Care: if you need to walk out of the workshop for any reason then do so; no permission is required 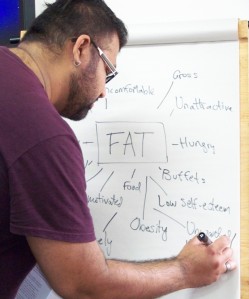 Asam writes “FAT” on a board and asks the group “What do you think of when hearing this word?”

* Obseravation: Every word on the board was negative

* These words are everywhere: media, culture…

* “It’s important for us [fat peeps] to use that word and reclaim it,” said Asam.  He feels strongly about encouraging others to use it if they identify as fat. 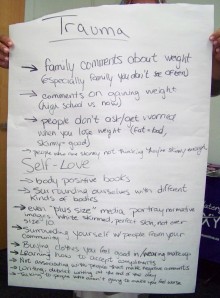 It Gets Fatter Project

* Why not celebrate the way we are and the bodies we have right now?

* Combatting the idea and slogan “It Gets Better”

* Assumption: your looks represent your health

* BMI (body mass index) makes no sense at all

* Exposing and exploring normalization of certain bodies over others eg. white vs Black

* Reminder: “Doctors aren’t God and they work for us…We should be a lot more critical of the medical industry and doctors,” said Sara.

* “Research has shown that you can’t know anything about anybody’s health by just looking at them,” said Sara.

* Western culture isn’t the only culture!  Many cultures celebrate fatness

* Take note, do research, of cultures and their views of bodies prior to colonization 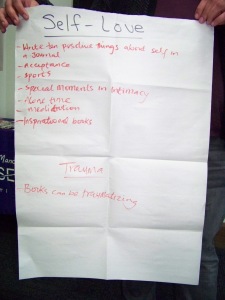 Video: Self Love Is Hard (But Totally Worth It)

Participants sat in two circles talked about what they learned and about two charts written up during the workshop: Self Love chart and Trauma chart.

Participants shared their thoughts on the workshop and gave thanks to the organizers and facilitators.

2 Responses to IT GETS FATTER: NOTES FROM A FAT-POSITIVE, BODY-POSITIVE WORKSHOP