OP ED: WHY CYCLING IS A POLITICAL ACT 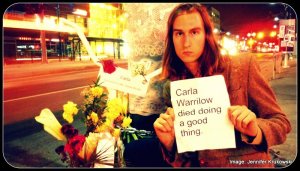 Why Cycling is a Political Act

Photo taken by Jen krukowski at the site of Carla Warrilow’s memorial.

After reading the coverage of the death of cyclist Carla Warrilow, my brain began a familiar process of stigmatization of the site of the accident. It is a process that occurs somewhere between consciousness and subconsciousness. I do this every time a bike death occurs in Toronto. In this case, it was Dundas St. West and Spadina Avenue. I have caught myself visualizing the intersection and painting it with a sense of doom, a dark cloud, and telling myself that that intersection is too dangerous now; it is off limits for me.

And each time this happens, as with this time, I realize again that cycling is a political act, and if I allow myself to be scared off my bike, I have done something quite unacceptable to me: I have yielded to the domineering presence of automobiles in this world.

The politically correct attitude cyclists are supposed to take towards motorists is diplomatic and resolute: let’s work together to make roads safer for cyclists and motorists. Of course, I want roads to be safe for everyone. However, it would be dishonest if I denied my disdain for automobiles. And each time I put my helmet on and take to the streets, I am committing a political act that rejects many of the things that cars represent symbolically, and cause materially.

Cars represent to me a society that is impatient, that moves yet is sedentary, that pollutes, that kills, that is individualistic, that consumes too much, that is unsustainable, that is poorly planned geographically, and that traps people financially. Riding my bike rejects all these things, and each time I ride, I feel connected to a better way.

Cycling is not just an expedient act for me; it is a political act.

So I hate cars, but I’m not going to waste energy hating drivers, because that would be myopic and counter-productive. Yes, some drivers are reckless and dangerous. Some cyclists are too. In Toronto, our piss poor road infrastructure sets up both motorists and cyclists to fail, and this is the important point. I recently visited Ottawa and felt rather green by my delight in seeing its impressive bike infrastructure, which was novel at first, then seemed merely obvious and sensible. Yes, of course we should have a medium to separate bike lines from car lanes. And of course we should put the bike lanes on the outside so we don’t get doored. Researching cities like Montreal, New York, and Portland demonstrated further to me how retrograde Toronto really is. In Seinfeld parlance, Toronto is the Bizarro World: while other cities add bike lanes, we remove them, like the one that used to be on Spadina Avenue, where Carla Warrilow was struck.

In spite of and because of all this discouragement, I decided to confront my fear and ride through Dundas and Spadina this past Saturday night, in solidarity with Carla Warrilow, and a future of safe cycling. The ride was peaceful enough. As I crossed through Spadina, I felt a chill. Moments later I landed safely at an anti-fur demonstration, feeling empowered that I once again refused to let the roads be stigmatized. About an hour later, I returned to my bike 25 meters away to find the front tire flat and the air cap removed. My sense of healing, as it were, was deflated. Ergo, the biking life is complex, emotionally and physically.

The bike trolls are always trying to bring us down.

But I’m not going to let this bullshit stop me. Not the trucks, nor the cars, nor the assholes that shout at me to get off the road, nor the philistine, victim-blaming mayor who refers to cyclists as little fish swimming with sharks, nor the thieves, nor my own self-preservationist brain.

If I stop cycling, they win.

Chris Michael Burns is an aspiring screenwriter and novelist in Toronto who is currently working on a novella. He prefers dialectic over debate.

1 Response to OP ED: WHY CYCLING IS A POLITICAL ACT