THE BOX OF BOOKS IN PAULA’S KITCHEN 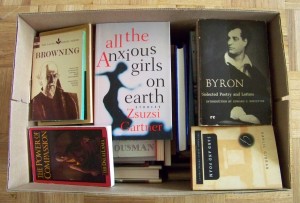 The Box Of Books In Paula’s Kitchen

“I still have that box of books for you in my kitchen,” said my friend Paula last month while we talked on the phone.

Paula had been holding that box of books for a few months for me.  Her collection was getting too big and she had to downsize; that box was filled with books Paula thought I would like.

Plan after plan to meet failed.  Still, the box sat in her kitchen waiting for me, its new owner.

Free books come my way regularly.  My friend Marcia gave me 45 books in January when she was moving.  Fellow poet Maureen Hynes has given me about 30 books in the last year.  And I recently had an offer by someone to give me books if I helped them clear their shelves (I still have to answer them; of course it is a “YES!”).

Still, I say, “Yes!” when people ask if I want to check out their book collection and take what I want.

To name it properly, I am a bibliophile.

I can’t walk past bookstores and not go in.  I might not buy anything but I have to look, hold, and read parts of a few books.  I am usually in a bookstore for 30 minutes, sometimes a couple of hours.

And don’t get me started on 50% OFF days at GOODWILL.  I definitely walk out with something, usually two to three books.  I once came home with close to a dozen.

So, for the last two months I have been thinking about that box of books in Paula’s kitchen.  She lives out of town.  If not, I would have gone over there the day she told me about the box.

That box of books was like treasure that I knew was coming to me.  Like my four year old neighbour who says, “mine!” to everything he sees, I thought about ‘my’ box of books.

Finally, this past weekend, Paula came to town.  My box of books was on its way.  But there was a little obstacle: my landlord.

I’ve got so many books that I’m scared I’ll be charged with hoarding.  So, I had to find a good time to sneak the box in, meaning a time when my landlord would not be home.  Paula knew this.

I ran down the stairs and out the door.  Paula was still in her car and got out when she saw me running at her.

Paula opened the trunk, passed me the box, and I booked it back to my place.

The box originally held recycled printer paper.  It was now the home to 41 books of all types:  religion, poetry, erotica, memoir, plays, and short story.

Most of the books are paperback and they are poetry so the box was not that heavy.

I opened my door, ran to my room, and set the box down.  I thought about Paula waiting downstairs but I had to look.  I sat on my bed with the box on the floor in front of me and opened it.

Byron jumped out at me.  Then The Dalai Lama.  Then came Shakespeare and Kahlil Gibran along with a bunch of Canadian poets and some queer books.

My hands rummaged as I sat bent forward.  My fingers flipped pages and my eyes looked greedily at words as I smiled. 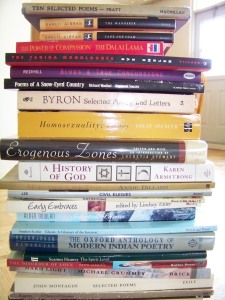 The Weight of Oranges by Anne Michaels (1986)

Minding The Body: Women Writers on Body and Soul Edited by Patricia Foster (1994)

All The Anxious Girls On Earth by Zsuzsi Gartner (1999)

The Collected Poems of Stevie Smith (1975)

I put the books back in the box and ran downstairs.

That box of books was no longer in Paula’s kitchen.  My hunger and curiosity had been satisfied.  Paula and I could now hangout.

That box of books was mine.

Tune into Black Coffee Poet Friday May 11, 2012 for the 2nd installment of my VLOG series FREE BOOKS where you’ll see all the book Paula gave me.

2 Responses to THE BOX OF BOOKS IN PAULA’S KITCHEN