In the live environment he reinterprets those songs by playing them alone, looping guitar parts and playing keyboard and drums at the same time while singing.

When not engaged in musical activities he can be found working as an accountant at a manufacturing company in Scarborough or teaching courses at York University.

DG: Well, I guess music is a pretty universal thing. I’ve only really met one person in my life who said that he didn’t like music..and he’s not the type of person you’d want to know, really. I’ve always loved music and thought that it was a worthwhile thing to do, and that girls might like me if I did it. Furthermore, some famous thinkers consider it the most concentrated form of emotional expression..all that emotion and appeal to imagination can obviously capture someone at a young age, not to mention all the romanticization of rock and roll in the media. Also, importantly, my brother started playing drums when I was 10 and went away to university soon thereafter, at which point I would regularly sneak into the basement and play. I was also lucky/privileged enough to have been given a guitar around the same age by my parents.

BCP: What is your song writing process?

DG: I will either play around on some instruments, recording along the way until something usable eventually emerges, or I go about my day and wait for a melody to slip into my head, at which point I will sing it into my phone and record it as a voice note. Sometimes things will come to me before falling asleep, or when I’m reading something, or otherwise not consciously involved in the process. With me both approaches are pretty laissez faire, but happy accidents happen when you’re not trying too hard in my view.

DG: Girls who look good (on the inside) and anyone who can write a nice hook. Anyone can dink around and dabble in genres and produce something but the generation of a nice melody is really a beautiful moment in time that can’t be forced, and that type of music just makes you feel dandy.

DG: Two things that community radio provides that commercial radio doesn’t are variety and quality. Underlying both points is likely the fact that artists who are excluded from commercial radio are featured on community radio. On community radio you have people who are passionate (sometimes about a pretty specific style of music) who have no commercial interests and whom are not necessarily trying to appeal to the widest audience possible, so you don’t have this lowest common denominator Nickelback mass appeal factor there. As for variety, each show is only a couple of hours long, so within the span of a day on CIUT one could encounter a bunch of great African music, jungle, indie rock and even pop from the 1960s. I like to listen to flow as well, but minute for minute, it’s not as edifying an experience as community radio.

BCP: You are a self-taught musician.  Are you constantly learning?

BCP: Your songs are very personal. What do you try to convey to your audience?

DG: That my heart is tender.

BCP: You album is made up of mixed-genres: pop, rock-a-billy, and instrumental.  Do you have a preference?

DG: I suppose of the three genres identified I would prefer ‘pop’ (hooky tunes) with singing as opposed to instrumental tunes, but sometimes nothing needs to be said in a tune, likely due to the idea I alluded to earlier about the ability of music to convey emotion.

BCP: Has your mixed background influenced your music? 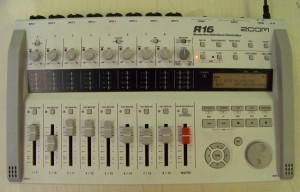 DG: Maybe in some sense. I haven’t thought about it too much believe it or not. It may have perhaps contributed to the eclecticism of my tastes..I guess I could never identify fully as an emo kid or anything like that, and the desire to be one-dimensional and to like one style of music that is closely associated with one ethnicity has diminished with time for me. But that may have happened anyways.

BCP: How did you come up with the name Maintenance Request Form?

DG: My friend Boner came up with it when I was in high school, and it remains one of the best band names I’ve ever heard.

BCP: How long were you working on the songs featured in Maintenance Request Form?

DG: The last album that I had released was 8 years ago with my old band Look What You Did. I’ve played in some bands since then, but none have released an album (haven’t had too much luck in bands), and so the songs have disappeared into oblivion. I feel that in my defense and in order to not sound pathetic, I should also say that my next album is almost done (I have 8 songs completed now). And it’s only been less than a year since the release of this album. And no, the new songs are not shit. On the topic, expect a lot more electronica/house and I seem to be dabbling in a bit of Motown and a teency bit of orchestral type stuff.

BCP: You were once part of a small band and now you are a solo act.  Why have you chosen to be a one-person band? 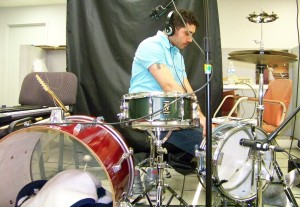 DG: Only because the people I like enough to play in a band with aren’t always available to play shows because they are busy being successful, so I just decided I wanted to play as much as possible because I greatly enjoy it, and that looping guitar parts and playing drums and keyboard at the same time and singing would be the way to do it. I’m not really a fan of singer-songwriter acoustic type stuff, personally. I guess I should also say that I consider the breakup of my first band to be my first real heart break, and as I’ve mentioned my heart is tender.

BCP: What advice do you have for other musicians starting out?

DG: Have fun and don’t be a douche bag.

Tune into Black Coffee Poet Friday March 23, 2012 for a video of Dany Georgi singing from his album Maintenance Request Form.