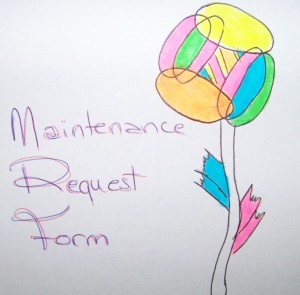 As Danny Georgi poured milk in his coffee I noticed his tattoo on his left arm.  The word “Mom” was surrounded by a red heart; a sweet statement.

“I respect a man who loves his mom,” I said.  Georgi smiled.

On the way to his car we chatted about tattoos and music.  Politics took over the conversation while driving on the 401.  The radio played CIUT, a community station as we shared ideas.

Danny explained his musical influences, his goals, and his love of music as we drove 100 KM/Hour.

Most independent artists work a job, any job, to maintain their art.  Georgi is no different.

“I work so I can have a car that will take me to do shows,” said Georgi.

Our trip together was to video-record him for this Friday’s video.  The taping happened at his workplace, a printing shop, on a Sunday afternoon.  The sun shone through the windows of the car as we sped to his office.  Once we got there he set up his instruments in the middle of a bunch of desks, hung a black sheet from the ceiling to use as a background, and tuned his equipment.

It was the first time I taped someone where I couldn’t hear their music because it was fed into a sound machine to be added to the video later.

Pro shit I’m not used to.

“Poppy” is how Georgi describes his music.  Really, it’s a mix of stuff, and his album Maintenance Request Form, also his stage name, is a mélange of musical genres.

A one-man band (see his video this coming Friday), Georgi plays six instruments, four of which are used in his album: drums, keyboard, bass, and guitar.

Sweet, short, guitar instrumentals start and end Maintenance Request Form: Theme 001 and Theme 003.  Played on repeat they could be used for relaxation or meditation as could Theme 002 mixed in the middle of the album.  Although I like them I wish they would be longer.  Duende by The Gipsy Kings is one example of a 3 minute instrumental that never gets old.  Adding two minutes to Georgi’s Themes would have strengthened them and the album.  His song Go Round is more like it.  Drums and cymbals entertain the listener and takes them for a happy ride.

It feels like, I don’t know, I should have been a contender.

So what if I don’t step on the ocean?

I should have been a contender.

Danny Georgi is a contender.  His album is funky and has songs of all varieties.  Some could be used for films, others for chill sessions and car rides, and a few get you thinking of past, and possible, loves.

Like the tattoo on his arm, Maintenance Request Form is sweet and leaves an impression.