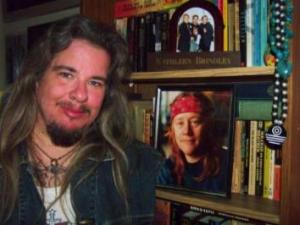 This story and photo originally appeared on xtra.ca on November 22, 2011

Toronto filmmaker Alec Butler met Kathleen Brindley in the 1990s while at a Village rally against racism and the white supremacist group Heritage Front.

“Take an egg. Throw it at a Nazi,” said Brindley.

Butler remembers his friend with kind words, a smile and a recent film, My Friend Brindley.

Butler was 13 years old when he first saw Brindley, who was 15 years his senior.

She was on CBC television news, representing a Toronto gay rights association. Butler recalls watching in awe as Brindley spoke up for gay rights.

Alec Butler says Kathleen Brindley taught him how to be proud of being queer and different.

“I was really inspired by her and how she presented herself against great odds,” Butler says. “She was a proud butch lesbian who was out.”

Butler continued to be inspired by Brindley after they eventually became friends.

He learned that Brindley was a civil rights activist who had met Martin Luther King Jr. She had also been expelled from high school for exposing one of her teachers as a Holocaust denier. Later, Butler says, Brindley had her windows shot out after she confronted KKK members in her home state of Indiana.

Brindley’s activism eventually got her on an FBI list, and she moved to Canada in exile.

Butler sees Brindley as a warrior who fought for human rights. “That’s what she passed on to me: the pride of being queer and being different and loving no matter what.”

When Butler got news that Brindley was sick with cancer, he decided to make a film about her.

Butler told Brindley, “I have to make a video about you, get your unique stories about growing up and coming out as a lesbian in the ’60s, getting kicked out of school because of it, what things were like for you.”

“I think it’s important for youth now, and for me, to remember what it was like to be gay and be lesbian in the early ‘60s. It was really hard; it was really dangerous,” Butler says.

“I called it My Friend Brindley because I think one of the most important relationships we can have is friendship,” Butler says. “That level of trust, comfortableness and safety is very precious.”

Butler’s film was finished after five years of work, long after Brindley’s passing. It is set to premiere at the University of Toronto Trans Film Screening Series on Nov 28.

“We had been wanting to feature Alec’s work for a while, mostly because he’s a local artist who is very present and active in our communities,” says Claro Cosco, co-creator and co-facilitator of the series. “He has produced to date a large and wide-ranging body of work and because he is historically relevant as an artist who has been out as trans while living and working in Toronto for many years.”

Butler, who notes his films have been rejected by larger gay and lesbian film festivals, says, “I’m really excited and proud that they’ve taken this on.

“My work is not mainstream. It’s pretty out-of-the-box in a lot of ways,” he says.

Butler believes his films, and the work of other trans filmmakers, is rejected by other festivals because of transphobia.

And, like Brindley taught him, he is fighting to change that.

“I’ve said that in the past and gotten in trouble. I’m not gonna stop saying that,” he says. “That’s me. I’m here and I’m queer.”

Tune into BlackCoffeePoet.com Wednesday November 30, 2011 for an inclusive interview with Alec Butler.

“Woman of colour friend needs urgent help, facing homelessness. She does not have a car or a personal support network. Needs boxes immediately for packing. In January or before would need help driving a moving van to a storage unit. Davenport/St. Clair West and Dufferin neighborhood.”

Black Coffee Poet is a mixed race poet, essayist, and journalist who focuses on Social Justice, Indigenous Rights, STOPPING Violence Against Women, Film, and Literature.
View all posts by Black Coffee Poet →
This entry was posted in Uncategorized. Bookmark the permalink.