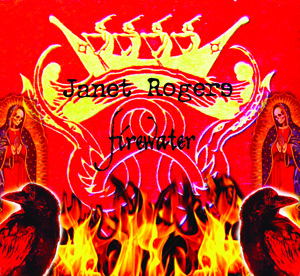 Have you heard of the term “taking back”?  It often refers to words and phrases that were once used as weapons against different peoples and that have now been adopted by the very peoples who were subject to such verbal abuse.  By doing so, they take the negative power away form the word and the people who once used them.

Mohawk spoken-word poet Janet Rogers has called her new CD Firewater.  A colonial term used by the colonizers of Turtle Island now known as Canada, firewater was, and is still used today, in reference to Native peoples and part of their history with the British; and not in a good way.

A common stereotype of Native peoples is “the drunken Indian” and it’s usually associated with “firewater”—alcohol.  Rogers takes the word back.  What is always referred to as “the downfall of Native peoples”, Rogers uses to strike back at the oppressor with her poems.

Comprised of twelve poems/songs, Firewater is fierce.  Living up to its name, Rogers burns your ears with truths and leaves you punch drunk with every poem.  Collaborating with various artists, Rogers puts together a collection that has you engaged, entertained, and eager for the next song.

One of the major rules of writing is “show don’t tell”.  Rogers does this well.  Although many of Rogers songs have Indigenous content, there is a subtlety throughout the twelve poems that reminds the listener that they are listening to an Indigenous artist—water.

Many of the poems have some form of water in them.  Some poems end with rain, symbolizing the washing away of the bad that Rogers sings of.  At times you hear rivers flowing letting you know that life goes on; you hear canoe paddling, letting you know you are on a journey with Rogers while listening to her, and with Creator as you walk this earth, and with yourself as you contemplate life and make everyday decisions; you also hear the ocean crashing, letting you know that life can be hard as well as soft, and that you have to go with the flow.

Water is also used to remind us of the torture that this life can be.  In her powerful poem Addictions, you hear water drops at the poems start.  Reminiscent of the water drop torture technique used in various wars, Rogers’ uses the monotonous echo of water torture as she sings her chorus “Addictions come back!”  Addictions is a sad poem, a scary poem, a real poem, and a very well written poem.

Addictions shows Rogers’ command of the English language and poetic technique.  Her use of repetition is symbolic of the vicious cycle that addiction is; her use of words that echo leaves you wanting to press “STOP” and wanting to finish hearing the song at the same time; and her turn around at the end is very cyclical, following her Mohawk tradition and spirituality: “Be your own power surge and kiss addictions goodbye one last time.”

Addictions starts with water as torture, incorporates a shaker like the many songs of Rogers’ Mohawk heritage, and ends with the sounds of the ocean cleansing the listener of the harsh realities shared in Rogers’ poem.

“Where are you now?  Where are we now?” asks Rogers in her first poem Distractions.  She sings of history, the displacement of Native peoples that in turn leaves us all who have come to Canada also displaced as a result of the colonization of Turtle Island.  Starting with the confusion that is the sound of searching for a radio station—that fuzz and buzz and voices come and gone—and followed by a gorgeous violin played by Swil Kanim, Distractions lays down the reality of where we are:

“Cities get torn between progress and politics”.

Rogers tells us to “embrace liberation inside, living on the outside of normal” and to “undo what we know not to be true.”  The poet sings the reality of anthropologists writing fictions about Indigenous peoples, the divisions in our society, how the minority are really the majority, and she encourages peoples to dance to their own drum.

An amazing poem, Distractions is mostly truth with some flaws.  Although critiquing the racist, colonial, oppressive practice of anthropology, past and present, (this reviewer has a degree in anthropology), Rogers uses anthropological language when she sings “moving with ancient faith”.  Ancient?  Ancient is a word that is used by our society in the Euro colonial tradition of top looking down, is not to my knowledge used in a “taking back” fashion by activists, and is out of place in such a powerful call to action as Distractions.

Indigenous cultures such as Rogers’ Mohawk tradition of story sharing, worldview, use of shaker and water, are here today, now, not in the past or ancient times as linear thinking anthropologists would describe Rogers, her peoples, all Indigenous peoples.

With so much positivity and spirituality that makes up Distractions there is a contradiction sung that is part of the very problem for which she names her poem.

“Love those we want an only those who love us back,” sings Rogers.

Amongst peoples who speak out against injustice there is a failure to see that the oppressor, although causing so much harm in the past and present, needs our empathy and love, as opposed to the destructive and distractive forces of hate and corrosive anger.

Racists, sexists, homophobes, men who are violent against women, members of colonial political systems, and multi national corporations, are all hurt people living in fear who lash out in violence and compensate through greed and the forced acquisition of land and power.  A large lack amongst activists and progressive people striving for change is the spiritual support for those who make and run the oppressive systems that activists are trying to change for the better.

Firewater’s cover is full of colours, images, and symbolism: flames of fire, crows, dragons, drawings of The Virgin Mary in skeletal form, and a canoe flying over everything.  It’s attractive and has you wanting to rip the package open, grab the CD and shove it in your stereo.  Once doing so you’ll hear a powerful manifesto that calls for all of us to strive for change through the taking back of oppressive language, learning who we are and where we come from, and working together for a new world.

It is no surprise that Janet Rogers has been nominated for a Native American Music Award in Spoken Word, 2010.  Listen to Firewater, learn from one of poetry’s most powerful voices, and take Rogers advice of living in a good and sacred manner.

To order Firewater go to http://www.janetmarierogers.com