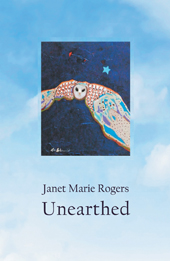 If I could get away with a one-word review the above would be it.

But let’s go a little deeper.

My first introduction to Roger’s work was last year and via her spoken word CD Firewater.  That too was amazing.

Unearthed is poetry on the page.  It’s different but just as powerful.  And Rogers has not strayed off her anti-colonial path.  Her words are just as fierce and poignant as ever.  And if they could be physically felt there would be a lot of people laying flat on their backs with a copy of Unearthed at their side.

While laying in bed reading Unearthed I was being uncovered.  Rogers peeled back layers with every sentence.  I smiled, laughed, stopped to think, and felt like someone knew what I was going through, specifically in terms of past heartbreaks.

Rogers isn’t just a tough Mohawk.  I’m sure she can stand at the front lines if need be but I saw a different side to Rogers.  The anthropologist hating Mohwak woman (“we create deep tracks for anthropologists to make fiction of our past”) was there but so was the woman who wrote about love loss in a good way, not Harelequin style.

In Free To Love Rogers writes of being honest, free, and in pain.  It’s not a tragic poem about never being able to love again.  That shit’s overdone.  Free To Love is about those hardships that come when you make yourself vulnerable: the gamble, the courage, the ride with no final destination in sight.

Rogers writes of being “wounded and all” and that “passion should not be confused with romance although it all lives in the same neighbourhood”.  She believes in her actions and responsibilities but also in a higher power.  Her descriptions of agency, “we are the train, we are words, we feel pain, we make medicine”, are followed by “The Great Mystery does not inspire questions but holds answers.”

Although Rogers has seen a lot, written about her experiences, and travels sharing her knowledge, she is not afraid to show that she does not know it all.  As she writes of Great Mystery knowing the answers she share her questions in Many Things Greater:

What happened to love?

Where is honour and support?

When did men begin to believe women are disposable?

Where are the miracles?

Rogers knows she doesn’t have all the answers so she spreads questions on the page, into our minds, and out into the universe.  Her title, Many Things Greater, shows her humble side and speaks for itself.

The activist side to Rogers is ever present.  Her spirituality shines but so does her in your face attitude.  With Aboriginal issues gaining more press and the Brown face of this colonial land now having a stronger voice, peoples want to know more but they often want to be spoon fed.  Rogers has a message, plain and simple, in It Can Happen:

I am not your teacher

Rogers might not tell or teach you straight out but she definitely shows you.  What The Carver Knows is just that.  I was taken back to a time when I was in Vancouver for a student journalism conference.  Ninety-nine percent of the conference was white.  Outside our hotel sat a Native carver who worked his craft day and night, wet or dry, cold or warm.  He was Brown and had long black hair like me.  And I was the only person I would see who would say, “Hi,” to him via a nod or words spoken.

What The Carver Knows is about a homeless Native carver who works wood past, present, and future, and so much more.  He sits on the sidewalk “transforming yellow cedar” while sipping on coffee.  People walk by, ignore, or don’t see him, or don’t want to see him:

he claims the cement as home

on a damp street corner

in a city which see so many like him

it rolls its eyes as numbers grow

he moans and bleeds

onto a thirsty earth

seeping down to meet

the bones of those who’ve gone before

of his skills and ability to survive

while we complain daily

Janet Marie Rogers does not spell it all out.  Neither will I.

Easy Time resonated with me a whole lot.  As someone who’s been assaulted by cops, arrested several times, and incarcerated twice I appreciated Rogers’ exploration of our current prison system.  While reading the poem you can see that Roger’s has thought about this topic, this reality, this extension of colonization that now houses mainly men of colour, 25% of which are Native to this stolen land.

Rogers writes of hyperamasculinity and the masking of pain:

they beat the bars

If Rogers was not a woman I would’ve thought the poet had done time with men.  Although the poem is not about her you can see that she does hurt, the poem is pain, and unlike the men who hide their emotions Rogers writes it.

Unearthed is an uncovering of so many issues, emotions, real lives who society would rather walk by, ignore, tuck away in a closet.  Through poetry Rogers shares her life and experiences and thoughts.  She stays true to her challenging nature and shows the reader her loving side as well.  As a Mohawk keeper of the land, poem by poem, page by page, Rogers herself is unearthed.