KISSING KEEPS US AFLOAT: A TALK WITH POET LAURIE MACFAYDEN 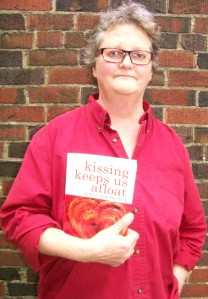 A Talk With Poet Laurie MacFayden

“Writers make shit up,” says Laurie MacFayden, author of the new poetry collection Kissing Keeps Us Afloat. “I’d like to say it’s all true but my life is really nowhere near that interesting.”

Born in Hamilton and raised outside Burlington, Ontario, MacFayden found poetry to be a source of healing from her constant feelings of being different from her peers.

“I knew from an early age that there was something different about me and not just in terms of sexual orientation and queerness; I just felt disconnected from the world and everyone in it.

“While the girls down the road were playing with dolls and house I was always in the bushes playing spy and army and cops and robbers with the boys,” says MacFayden. “I was very much a tomboy.”

Her poem Different is informed by her childhood experiences. The poem starts with something familiar to many queer folk:

there was something different

the mother didn’t want to know

Later, with great use of alliteration and repetition, MacFayden confirms her mother’s suspicions:

she didn’t get married

didn’t get the shower gifts

she was not who she was supposed to be

Now fifty-seven years of age, the above stanza reflects MacFayden’s lived experience as a lesbian long before queers were able to get legally married and have kids.

“It might be that my poetry is where it is now because I was forced to confront my sexual orientation at age twenty and deal with it and become comfortable with it. When I was coming out it was the late 70s, it was nowhere near the safe climate it is now,” says MacFayden.

Poetry being the form in which she came out first MacFayden says, “I finally felt free to be completely honest about who I was writing about and not trying to camouflage it anymore.”

Living in Edmonton for the last twenty years MacFacyden is a journalist, artist, and poet with two collections to her name, White Shirt and Kissing Keeps Us Afloat, both published by Frontenac House, a queer friendly press based out of Calgary.

“I think I’m coming of age as a writer and as an artist,” says MacFayden. “The kind of stuff I had to face probably made me a better writer.”

Understanding solace and being silenced and knowing the benefits of poetry in her life, MacFayden created an all queer spoken word event for the Edmonton Literature Festival in 2011 and 2012: “Shout It Out!”

“I created a queer spoken word event for that festival primarily because I wasn’t seeing one,” says MacFayden. “I wish there was more openly specific queer stuff going on.”

With no need to hide from anyone anymore MacFayden’s poems are definitely open and have lots of queer stuff going on: Liars Motel is a steamy poem about adultery;

Before The Next Conversation is about two lovers who know they should not be with each other but can’t stay away from one another; You At My Door brings the reader to a see-saw relationship based on lust.

Of the title, Kissing Keeps Us Afloat, Macfayden says “I think that love does keep us afloat and kissing is a big part of that. It’s the simple concept that kissing is lovely and sweet and we should all do more of it.”

Currently in an 18year relationship with the same person, MacFayden acknowledges six lovers being written about in her new book and that most of the hot and sexy poems are stretched truths.

“That’s what writers do, you take those exciting bits and you write about them and you exaggerate them, or extrapolate them, enhance them,” says MacFayden.

Although feeling isolated and othered in her youth, MacFayden’s spread her wings on the page, bringing joy to many readers, and showing the power of transformation via the written word.

The end to her poem Different shows one thing is certain:

who she was supposed to be