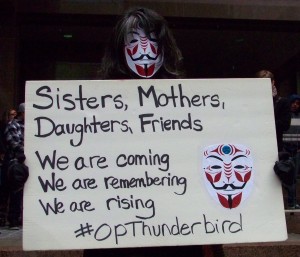 Is Canada a utopia?

For many people it is not any of these.

One of the main things that is not talked about is that Canada is stolen land.

Canada is a corporation that has not honoured many treaties with the original peoples of Turtle Island now known as Canada.  And the many different peoples from different Aboriginal nations who were here before Canada was formed are still here, and they are often forgotten, as well as vilified, by the larger Canadian society.

One of Canada’s main dirty secrets is that 800-plus Aboriginal women have been murdered or gone missing since the late 1970s.

And Canada is doing nothing about it!

Every February 14th thousands of Aboriginal peoples and their allies hold vigils, rallies, talks, and many other events to bring awareness to the epidemic.

Below are three video resources for you to find out more about the epidemic of Missing and Murdered Aboriginal women in the land now known as Canada.

Here is an interview I did with Haisla writer Eden Robinson in 2011.  She breaks down this epidemic quite well:

I had the privilege of being on Indigenous Waves Radio in 2012.  We talked about the epidemic and actions to stop it:

In 2012 community Elder Wanda Whitebird shared her knowledge on the epidemic and how it all started!

Educate yourself and others on this epidemic.  SHARE and TWEET these videos; attend vigils and rallies and talks; and remember the 800+ Missing and Murdered Aboriginal Women in the land now known as Canada.

Do you appreciate the work I do?  Do you have a book you’d like me to read? Consider treating me to a coffee, donating to my site, and sending me a book!  Click here to find out how.