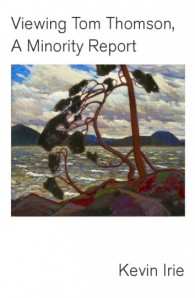 I remember being in Guadalajara, Mexico staring at El Abrazo by Jorge Gonzalez Camarena and being in awe.  Thoughts rushed into my head and later flowed from my hands into my laptop.

Toronto poet Kevin Irie has done the same in a much longer form: Viewing Tom Thomson, A Minority Report.  Poem after poem are thoughts on Thomson’s work in relation to Irie’s life and Canadian culture.

As someone who appreciates art but has no real knowledge of it, Irie’s poems were intimidating at first and a pleasure to read by every poem’s end.

“Who is Tom Thomson?” I asked myself before reading Irie’s newest collection.  I didn’t get a complete answer as much as I got to see Thomson’s work through Irie’s eyes.

The title poem starts with a quote by the late, great poet Adrienne Rich:

When I look at that wall I shall think of you

and of what you did not paint there.

And so, the journey begins.

Viewing Tom Thomson is a numbered poem chopped into sixteen parts.  It could be its own chapbook.  And it could, and should, definitely be studied by poets looking to learn how to write long poems with disciplined focus.

Clever lines, beautiful lines, and great use of metaphor have you put down Irie’s book to think, appreciate, and smile at the thoughts and images he brings you. Irie’s politics come through in every section:

His critique of the elite and their land grabbing for cottage country:

if each had a summer cottage.

Consumerism and its bastardization of art; in this case, Thomson’s art:

a Thomson calendar for kitchens.

Your wilderness hangs like shot game on a wall.

Art as an afterthought:

Irie doesn’t just get political.  He points to the power of art and where it can take you while showing you that there is not one way, or ‘right way’, to view something.  Irie points to Canadians who’ve never trekked north being able to go there via Thomson’s art.  The poet also writes of global citizens viewing Thomson’s work and seeing their homelands in it.  Irie sums all this up with a gorgeous line:

Thomson was white and he painted in the late 1800s/early 1900s.  Irie writes of no one knowing how he died and describes him as a martyr.  But I’m left confused with Irie’s short exploration of race in relation to Thomson and Canadian culture.

Irie writes of Thomson being “painted with privilege” because he was white.  True.  That’s a truth that stands today, long after Thomson has died.  And he points to the whiteness of Canadian culture and who it chooses to highlight and paint as heroes: “Better the martyr be male, Caucasian.”

This brings to mind the title of the book being a “minority” report.  With Irie being a man of colour who is the writer of this collection, is he the minority writing the report?

Irie critiques Thomson being labeled a “dead white male” who is the descendant of oppression.  “Joking?” asks Irie.  The poet follows by bringing in analogies of gender and different races to back his question/statement.  They don’t add up.  Irie asks:

What have you done to earn my contempt

but made me acknowledge the ones who hold power?

Thomson may have been a great critic of power, and the hands that hold power, but he would not have been able to do so, and be taken seriously, if he was a person of colour or if he was a woman in that time period.

Irie touches upon many aspects of life via his poetry:

Irie has lines that will have me open his book again and again:

If Tom Thomson takes you to Canada’s north, Kevin Irie takes you to Petawawa, Toronto, many rivers and lakes, snowfalls and snowstorms, ravines and art gallerys, the violence of seasons, and a search into your own life.

I read Viewing Tom Thomson, A Minority Report in one sitting.  I took notes, paused, sighed in relief, smiled, became a little jealous, re-read lines and poems in reverence, and gave thanks.

While writing this review I thought of how I will re-read Irie’s book many times throughout my life, and I remembered his last line in the title poem:

Searching for what is there, and not there,

the eye takes in what art leaves out.

Tune into BlackCoffeePoet.com Wednesday November 7, 2012 for an inclusive interview with Kevin Irie.