WE ARE WHO WE ARE 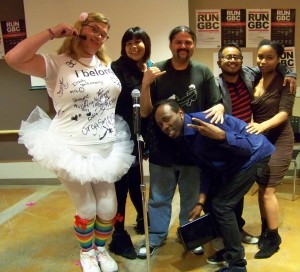 We Are Who We Are

“I am my mother!” I said to the crowd before I read my poems at George Brown College last Wednesday.

I was performing at an event called We Are Who We Are.  Many performers were on the bill and we all identified differently.

The Face Book description for We Are Who We Are read:

When asked by Tanis Desjarlais to be part of the event I jumped at the occasion.

How many times in life are we labeled in ways that we feel uncomfortable with, disagree with, and feel violated with?

The stage at George Brown was set for false notions to be challenged, corrected, and tossed.

I was honoured to partake in the challenging, corrections, and tossing with

Before the event I hung with spoken word artist Lena Recollet who read Pitch Black and Single Mother for future dates on blackcoffeepoet.com.  Her spirit helped set the mood for the evening.  We laughed a lot while hanging in the makeshift performers room.  After a little catch up talk we got to business: camera setup and videotaping.

It’s a pleasure seeing Lena Recollet recite poems.  She inhales relaxation breaths, closes her eyes, and then brings the thunder!  Single Mother left me in awe.

After Lena was done I started taping Stefoknee Wolscht.  Take after take after take was filled with laughter.  It felt like Hollywood minus the yelling of “Cut!”

We got the job done and then it was time for the live performance.

A crowd of about 20 people came out to support.  Three events were happening that night around the city so 20 was a great number.  You could feel the love in the room.  All the performers got claps and hoots from the crowd.  And although many of the poems were serious much laughter was spread.

Dainty Box showed her style and poise via burlesque; her shoulders and hips never missing a beat as she had all eyes glued on her from beginning to end.

Milo D’Milo asked the crowd to be vulnerable while leading the procession of heartfelt transparency by sharing words about heartbreak and identity.

Stefoknee shared a Cherokee proverb and her experience with dating the Ford brothers after she challenged society’s transphobia via her brilliant poem Hey Looky Looky.

Lena Recollet brought laughter to he mic before her poems had some tear-up from the beautiful images her words formed.

All the performers brought it!

All the performers left themselves on stage and had the crowd leave with something.

All the performers showed who they were and why.

“I feel full” said Recollet after the show.

There was no better way to put it.

Big thanks to the ASL interpreters and Trey for awesome MCing!

Tune into Black Coffee Poet Friday October 26 for a video of BCP reading at “We Are Who We Are”.

1 Response to WE ARE WHO WE ARE