THE HUNT FOR HEINRICH BOLL 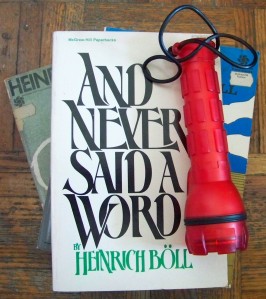 The Hunt For Heinrich Boll

When I used to steal cars (at night) I would wear black shoes, pants, shirts, gloves, and a black hat, sometimes a tuke or a black ski mask.  A matching black flashlight would be with me as was a black slim jim which I used to open car doors.

Underground parking garages were the best!

Driving away from large well to do homes was a great feeling too.

It’s been a long time since I’ve done that type of stuff.  Cars are so advanced now that I doubt I could take any late model vehicles.  I also don’t have the connections that I used to.

I’m a reader and a writer.

I’m no longer a thief.

Although, yesterday saw me go into old territory; sort of.

My day started with an argument with my roommate.  They were on me about all the books and magazines I have stacked all over the place.  Poetry and short story collections, memoirs, copies of The New Yorker and Poets and Writers magazines, and some newspapers that are resting in different piles.  Many different piles.

I can’t help it!  I love books.  And free books keep coming my way.

After being tired of listening to my roommate I left the house to write, visit some peeps, have lunch with a buddy, and play some pool.

My visit with extended family went well.  We laughed, chatted, and sipped on coffee.  And as if my life, books got involved.  A package from Quattro Books, a local publisher, was waiting for me at the place I visited.  Two novellas ready to be read and reviewed: The Panic Button and The Lebanese Dishwasher.

At 2pm I moved on to meet my buddy Danny.  My knapsack held my journal, notepad, and Skin Like Mine, a book of poems by Garry Gottfriedson.  My right hand held my pool cue, and my left carried my two new novellas.

Danny and I met at a used bookstore and then moved on to a local sushi place.  Upon meeting he handed me a copy of The Narrows by Michael Connelly.  It’s a mystery novel with a poet being the murderer police are after.

That’s 3 books given to me in less than two hours!

“It’s a dark book,” said Danny as we woofed down our chicken katsu.  He didn’t finish the novel.  Now I’m more eager to read it.

Lunch finished as did the five games of pool that followed, and we parted ways.

I moved on to a park to rest, think, catch some shade, and pray.

Resting on some dirt by some flowers was a book: A Man by Oriana Fallaci.  I picked it up, read the back, and flipped through the pages.  It looked like it was left purposely for someone, anyone, to take.  In my pocket it went.

Once feeling rested I got up to walk home.

A quarter of the way home I noticed a box with the words “FREE” written on it.  It’s a familiar scene in my life.  I walk through neighbourhoods for this exact reason. Lo and behold there were books in the box.

As I rummaged through the box I picked out books by authors I’ve been meaning to read but haven’t read yet:

The Same Door by John Updike

The Music School by John Updike

I met George Elliot Clarke at a fancy dinner years ago.  He’s one of Canada’s best poets.  We ate at the same table and discussed books, of course.  He and his wife were shocked that I knew her place of birth: Mauritius.

“Yes, just off the South-East Coast of the continent of Africa,” I said.

Apparently nobody knows where Mauritius is.

I won Clarke’s heart that night.  I felt like Will Smith in Six Degrees Of Separation except that I was being myself.  I hope to enjoy Wylah Falls; I hope it wins my heart.

There was a set of books I left in the box written by a German writer.  One of the titles caught my attention: Billiards At Half Past Nine.

The owner of the house seemed to really like this writer.  There were 6 books by the same author.  I had a lot of books and I didn’t have room in my bag anymore.  I also had a pool cue in one hand and a jar of honey in the other.  Maybe it was time to let this one go?

When getting home I talked with my friend Paula, a fellow book junkie.

“Have you ever read Heinrich Boll?” I said.

I knew Paula would not only know of him but that she probably read him.

I told her about the box and the 6 books by Boll that I left.

After our talk I looked up Boll on the net.  He won the 1972 Nobel Prize for Literature.  He is one of Germany’s few recognized writers.  And he writes about themes I like: loneliness, contemplation, fear, relationships of all sorts as well as the small things in life that get ignored.

A couple of hours passed by, I had dinner and a couple of conversations with people, and I could not stop thinking about the Boll books:

“Are they still there?  Do I need more books?  Will I even like him?”

10:30 pm rolled around and I couldn’t take it anymore.  I grabbed a black bag, a red flashlight I bought at the Dollar Store, and I put them in my knapsack.  I was off to get those Boll books.

The house with the box of books is a half hour walk from me.  As my feet stepped I thought this is what I am supposed to be doing.  I am a reader and a writer.  Boll is someone I can learn from and hopefully enjoy.  This is me.

Side streets, hills, stairs, and a little jaywalking saw me approach the nearest intersection.  Once I hit the light it occurred to me that I had not used a flashlight in this way in years.  I noticed that I was wearing a red shirt, cream camo shorts, and my new, sweet, red and white Nikes.  All non-thief attire.  But, the box says “FREE” on it.  I’m not stealing.  I just need a flashlight because it’s dark.

I hit the street and saw no box.  Wrong house.  It was further down.  I crossed the street  and saw my goal waiting for me.  I kneeled down, took out my black bag and flashlight and started my search.

I smiled.  All the Boll’s were there:

Billiards At Half Past Nine

Children Are Civilians Too

And Never Said A Word

The Last Honor Of Katharina Blum

One by one I put them in my bag.  Then I saw a body come at me.  Before I knew it a man was behind me.

“I’m gonna put these back,” said the owner of the house.

He looked nervous and pissed.

“The box says FREE,” I thought.

The man’s partner came out.

“Is he done looking at them,” she said standing by the door with her left hand on her hip.

This wasn’t a gig I was doing for $1500 a per vehicle.  This wasn’t about the latest model car; hell, they weren’t even ‘books’ that people were reading today: those famous “E” books that have people throwing out real books!

I hit the nearest 24 hour coffee shop to celebrate.  I sipped on chamomile tea, put pen to pad, looked at my new stack of books beside me, and wrote about my new friend: Heinrich Boll.

1 Response to THE HUNT FOR HEINRICH BOLL