HONOURING ABORIGINAL HISTORY MONTH 2012: DANCING ON OUR TURTLE’S BACK: STORIES OF NISHNAABEG RE-CREATION, RESURGENCE, AND A NEW EMERGENCE 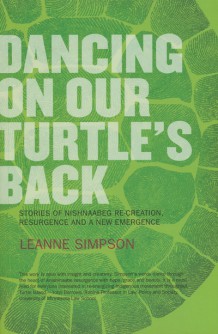 DANCING ON OUR TURTLE’S BACK:

STORIES OF NISHNAABEG RE-CREATION RESURGENCE AND A NEW EMERGENCE

Telling a writer “I couldn’t put your book down,” is normally a compliment.  Telling an author that “I had to put your book down several times,” would not generally be understood as praise but in this case that’s what it is.  It took me quite a while to get through Dancing…  Whipping through it would have been like gobbling down a gourmet feast.  Instead, I savoured the experience, allowing feelings generated by the words to infuse my being, challenge or validate my thoughts and inspire me to new heights.

The first time I met Leanne Simpson she was speaking at an anti-racism conference in Toronto. Her talk was, for me, a refreshing change from panel discussions and presentations that were full of left-wing jargon, academic language (that even some academics didn’t understand) and left-brained theories that did little to get the gerbil on the wheel of my brain galloping with excitement. She was among a handful of people who were able to, from my perspective, share anything novel and transformational at that conference.

Leanne simply talked about how the experience of breastfeeding her two children taught her about treaty-making and treaty-maintenance.  I was delighted to read a repeat of that simple but profound teaching in Dancing…, and to feel affirmed that storytelling can be more than entertainment, passing on knowledge and laying the groundwork for theory.  It can invite the recipients of story to craft their own wisdom, both collectively and individually.

My screenwriting teacher used to tell me that the worst scripts she’d ever read, the worst films she’d ever seen, were stories about making stories.  Yet Leanne’s time-honoured approach of using multi-layered storytelling and framing story with story, allows readers to absorb information according to their needs and inclinations; take sustenance into whatever parts of their spirit need nourishment.

And make no mistake about the gentleness, kindness and nurturing that Leanne weaves into, around and through story.  She possesses an understanding of the brutality of colonialism that is as clear as the pre-colonial waters of Chi’Nbish (Lake Ontario).  She further offers a critique of settler society that is as sharp as arrowheads that once pierced the hearts of game that fed the Nishnaabeg people.  Her keen analysis and thorough knowledge of pre-colonial lifeways contextualizes old stories and the cast of characters they contain.  Leanne then frames her interpretation of these wisdom teachings with her own stories from her life as a Nishnaabekwe (Nishnaabeg woman) in the 21st century.  From breast-feeding to having her work attacked by colleagues to viewing performance art to marching through Peterborough to assert an Indigenous presence, Leanne uses her experience to derive deeper meaning and share increasingly more nuanced understandings of concepts like governance, sustainability, community, collectivity, parenting, decolonization, gender relationships, ceremony, language retention, cultural reclamation and so much more.

In exploring the language that communicates the old stories, Leanne carefully includes various translations and interpretations from different Elders and dialects.  In doing so, she presents a language that defies static English interpretations and demonstrates the flexibility, tolerance and fluidity that underlie Nishnaabeg culture.

This book was written for Nishnaabeg people but can also inform those who cannot get past a superficial understanding of what has become cliché about Indigenous cultural revival (land informs culture, culture is infused with spirituality, language shapes worldview and vice versa, etc.).  Leanne skilfully demonstrates how reclaiming, sharing and living Nishnaabeg culture can be an act that transcends resistance and serves to lay the groundwork for visioning and (re)creating sustainable, life-affirming ways of being on Turtle’s Back.

In sum, Leanne makes a strong argument for allowing the values and mindset of pre-colonial societies to inform our collective lifeways because it will ensure the ongoing regeneration of life.  This book should be required reading for all those living on Nishnaabeg land.

Zainab Amadahy is a writer and activist of African American, Cherokee and European heritage.

Her publications include the novel Moons of Palmares (1998, Sister Vision Press) as well as an essay in the anthology Strong Women’s Stories: Native Vision & Community Activism, (Lawrence & Anderson, 2004, Sumach Press).

Most recently Zainab contributed to In Breach of the Colonial Contract (Arlo Kemp, ED) by co-authoring “Indigenous Peoples and Black People in Canada: Settlers or Allies”.  Many of her recent articles can be found on rabble.ca.

As an artist and activist based in Toronto Zainab has worked with a variety of organizations to support decolonization, social justice and First Nations struggles.

Tune into BlackCoffeePoet Wednesday June 6, 2012 for an interview with Leanne Simpson.

5 Responses to HONOURING ABORIGINAL HISTORY MONTH 2012: DANCING ON OUR TURTLE’S BACK: STORIES OF NISHNAABEG RE-CREATION, RESURGENCE, AND A NEW EMERGENCE