Janet Marie Rogers is a Mohawk/Tuscarora writer from the Six Nations band in southern Ontario. 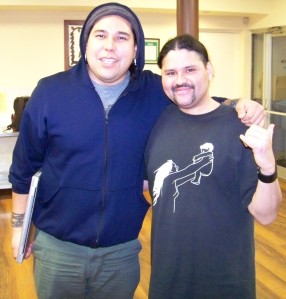 Dallas Goldtooth is a member of the 1491s.

He is a language activist, actor, comedian, and he loves his mother.  From Dallas’ Face Book profile:

I be a father.

I be a partner to a lovely lady from Oglala country.

I be a brother and a decent son.

Jamaias is Host and Producer of The Vibe Collective and Executive Producer of Indigenous Waves Radio, both on CIUT 89.5FM.