BROKEN ARROW 2: OUR FOOTPRINTS: JOURNEYS ON THE RED ROAD

OUR FOOTPRINTS: JOURNEYS ON THE RED ROAD

Footprints show you were a person has been and where they are going.  Some are deep, others are surface, all footprints tell a story.

The Sagatay Men’s Writing Group has put together another fantastic zine.  Several journeys are compiled into 50 pages of poetry, memoir, song, artwork, and experimental verse.

Looking at the cover you know once you open Broken Arrow 2 you’re going on a ride.  Splashes of red, yellow, black and green make up images that are all part of Indigenous ways of being: sun, moon, stars, and the Read Road.

The zine’s words will provide light, insight, and paths into the lives of its 23 writers.

The Trail by Kevin Copegog is a poem, a herstory lesson, and teaching all in one.  The succinctness that poets are known for is evident on Copegog’s 6 lines.  Copegog’s first line tells readers they are on Native land and her name is Turtle Island.  He locates himself as a member of one of the many First Nations of the land now known as Canada:

Ours is the oldest and best trail.

The poet shows pride in the place where he is from by writing of its beauty found in “every corner, hill, and tree”.  The herstory lesson turned description turns to teaching as Copegog leads his reader to the present:

All trails lead to something,

It’s up to you to see what’s at the end of yours.

Copegog ends by locating himself as a member of Sagatay Native Mens Residence:

Or is it a new trail, on a new beginning, from Sagatay?

Sagatay is a place of healing, new beginnings, a part of the Red Road, a starting point for Native men to walk a new path.  My Resurrection by Jason Boucher shows readers all that and more by sharing his history of loneliness, pain, and holding on the past.  When reading the first few lines of the poem you can see the scars that once marked Boucher’s soul.  The middle starts to show a man transforming, embracing change, and writing humbly:

You helped me to learn its OK to cry,

to trust without reason and never ask why.

Accept who I am and to let go of the pain,

For life cannot grow without the rain.

It’s hard for most men to admit they cry let alone tell the world via a piece of writing.  Boucher is living Indigenous teachings on the page: truth, bravery, humility, love and more. 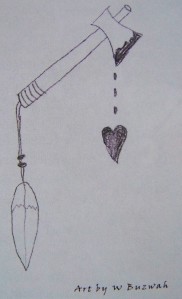 Boucher’s choice of title can be interpreted as many things: accepting Christianity, leaving addiction for a life of sobriety, embracing his inner child so as to grow into a man.  One thing for sure is that Boucher has picked himself up, stands tall, and walks the Red Road on two stable feet.

The rawness that made the first Broken Arrow a great read has followed itself to its sequel.  Where I’m From by Wes is a repetition poem that shows honesty, contemplation, and growth.  Writing of his negative childhood, mixed race identity, and colonization, you see where Wes cam from, who he was, and who he is.

Starting every line with “I am from” Wes talks of “dysfunction”, “confusion”, and “hurt”.  He acknowledges past, present, and future followed by a change in how he perceives himself and no longer accepting what this racist, colonial society tells Indigenous peoples:

I am from savagery, I’ve been told.

Not once before this line was a comma or questioning tone used.  It is here where Wes changes the paradigm of how he views himself.

What follows is a man showing that he loves, forgives, and accepts himself:

I am from worthiness

I am from time and gentleness, again and again

I am from willingness

I am from wanting

I am from the Pow Wow.

Broken Arrow 2: Our Footprints: Journeys On The Red Road is filled with many stories of lives most people don’t get to see, or want to see.  Two Spirit singer Robbie Madsen shares 6 pages of his forthcoming memoir; S Keyokey drew a comic; Ed Bennett shares a poem about his Inuk guides; Roger M. writes about his Kookum—grandmother; Kurtis Carter writes about hope.  Broken Arrow 1 contributors James C. Miles and Rainkeeper also appear with poems of love and comedic, yet sad, list poems.

Broken Arrow 2 isn’t about following in someone’s footsteps, it’s about making your own.  See how the men at Sagatay found their footing and enjoy writings of their journeys on the Red Road.

To grab a copy of Broken Arrow 2:

4 Responses to BROKEN ARROW 2: OUR FOOTPRINTS: JOURNEYS ON THE RED ROAD