BCP: Why did you start writing poetry?

Y: I have no idea why I started writing or composing. Or breathing.

SA: I don’t remember a why either. I remember an impulse.

BCP: What is your writing process?

Y: I do a lot of automatic writing, and follow-your-intuition kind of composing. Not sleeping helps.

SA: It varies. Sometimes it’s an impulse, inspiration. A poem arrives out of nowhere, fast and almost fully formed. Other times it’s plodding and difficult. Those are probably the times I think too much about wanting to say something, instead of just letting it happen. Sometimes if I lack inspiration, though (cuz who can sit around waiting forever?), I look to the work of other poets. I try to have a poetic conversation with them.

I spend a lot of time editing and re-writing. I’m an editing addict. I love considering many ways to express something. Some of my best work has come out of back-and-forth conversations with Stuart Ross, who edited both of my poetry books. And through input from other writers and friends.

BCP: Has writing poetry informed your other writing?

SA: I like this question a lot. I think it most certainly has. I find it difficult to write longer short stories; my stories are about two pages max. I think about almost every phrase – about how it sounds, how it looks, whether it’s necessary. I’m not saying novelists don’t do this, but I think perhaps most of them are slightly less concerned (than poets are) with the role of language itself.

I’m a poet at heart. I write plays and short stories, make films and take photographs. But all of my work is arguably a derivative of poetry.

BCP: How did Zorras come together?

Y: Accidentally. Sandra liked queers and Spanish tapas, and I worked in a queer Spanish café in Edinburgh. Sandra was organizing a reading and music series, and needed a musician. She heard from my co-worker that I played in a band and invited me to play. I asked her after the event if she’d like to collaborate.

BCP: Why the name Zorras?

SA: And also because on the night of our first rehearsal in Edinburgh we saw a beautiful fox just chilling in a park. Urban foxes lead high-risk and short lives in the UK – people hunt them down or run them over. But they’re resilient.

Y: Zorras is made up of people who identify as queers, genderqueers, crips, women, migrants, poor and/or people of colour. So we feel a certain kinship.

BCP: Much of your writing is political.  Do you also write about the fun stuff of life?  Why or why not?

Y: If you check out our short film, El Villano/The Villain, you will see us having a ridiculous amount of fun. http://www.youtube.com/watch?v=Hw93-1SpyWM&feature=channel_video_title We both have a strange sense of humour, which is what I think brought us together.

SA: We are very into fun. A few of our pieces are ridiculous, silly and/or surreal, like Head Games. And yeah, we like humour, even in our political pieces. We think laughter is supremely important. But it’s true, we don’t have any pieces about how much fun we had on the weekend eating corn on the cob with our old friend Susy. I guess I consider that uninteresting to the audience. Though Susy is supremely interesting, don’t get me wrong.

BCP: You mix English and Spanish together in your poems.  Is that a difficult process?  Is translation a concern of yours?

Y: We both speak several languages (mainly Spanish and English) so it happens naturally. But yes, Sandra is obsessed with translation.

SA: Mostly with its failings. I’m into the concept of failure generally.

BCP: How has the European audience taken to your activist stance?  You sing about Palestine, Iraq, Afghanistan, and Ireland in After Going Out.  Are those subjects taboo where you are from?

SA: Because of a long story about borders and other ridiculousness, we’d only performed in London, Manchester, Glasgow and Edinburgh up until two months ago. Then we quickly ran off to Berlin, but we can’t really say much about European audiences overall.

I don’t think war and occupation are taboo subjects in Scotland or the UK, no. Or probably in most of Europe. When you live in the belly of the beast, it’s unavoidable.

Scotland has quite a large number of people supporting Palestine. Despite its deep problems with racism, Scotland has also kicked out the English Defense League (who want to reclaim Britain for “indigenous whites”) on many occasions – and wholeheartedly rejected the Conservatives in the last election.

England’s nuclear submarines are kept in Scotland. Weapons are delivered to Israel via Scotland. Some Scottish people have protested both Trident and gone as far as to try to intercept missile shipments. But like most places, there are many many people who support the Powers That Be.

In terms of audiences in general, though, we mostly perform for leftist, disabled, queer and/or experimental art events. I guess we *would* probably piss off a bunch of people – if they ever heard us 😉 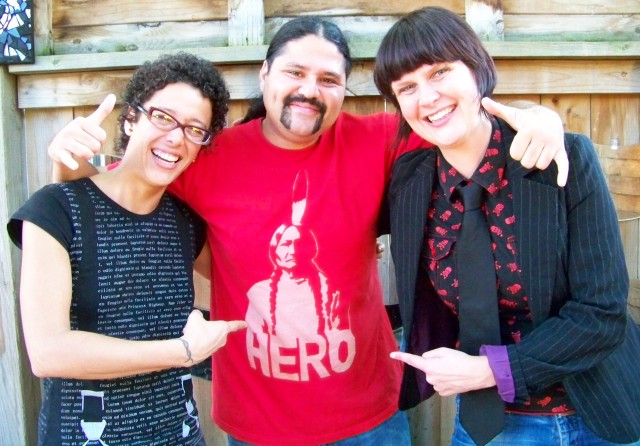 BCP: You sing about Indigenous land rights.  Is the European audience educated in such matters?

SA: Mostly that’s a resounding, echoing No. It’s troubling to be in the Colonizer’s house, and the Colonizer appears to be suffering from acute memory loss. It’s something I’m disturbed by, and have been trying to write about. Here’s a few lines from Humpty Dumpty:

Y: You can get Native American tarot cards. A lot of people wear Indian and Mexican costumes for stag & hen parties, and Hallowe’en…  of course, there are a few groups in Edinburgh, or who visit Edinburgh, that do great work to support Indigenous people.

But most people don’t have a clue.

BCP: Non-accessible academic writing, long and boring speeches, and yelling slogans on a megaphone are given precedence over poetry in the activist world.

What role do you see poetry having in activism?  How can poetry get more than a quarter of a page in a magazine (if at all) and be used as more than an opener at events?

SA: Poetry has the ability to move people in a short amount of reading or listening time. That’s powerful stuff.

Poetry will only get more attention in the media when power structures change. But in our own communities, perhaps more poets and other artists need to be at the centre of the organizing process for activist events. Art encourages creative thinking, which can inspire activist communities to try new tactics.

BCP: How long did it take to put the CD together?

Y: A year and half of writing, performing and rehearsing, two days of recording, three days of mixing. We worked with a really great guy who knows what he’s doing – Andy Duncan.

BCP: How has the tour been going?  Where are you performing? ? Is it hard getting gigs as a traveling poetry act?

What’s been extra-great is the beautiful reception we’ve received from smaller places like Cobourg (22 Kings Gallery). Some people assume small towns are terrible, art-starved places, but there are often plenty of people in small places struggling against all odds to make art part of the landscape. Cobourg has a new indie art gallery and a new indie bookshop. Also, they have at least one punk band. We know this because the sweet sweet Mahones are lending us sound equipment.

Y: It’s really easy for us to get gigs. What’s harder is getting paid gigs, lol. Or to be specific, paid gigs for people we like. When you put your communities first, and your communities are mostly broke-ass communities, you often end up with no caviar.

Y: All freedom struggles are important to us.

SA: I’ve read more articles, blogs and non-fiction books. I’ve read some Palestinian poetry, but not enough. I used to work in an amazing bookshop in Toronto (This Ain’t the Rosedale Library, RIP), and hung out at Toronto Women’s Bookstore too, but we don’t have anything comparable in Edinburgh. Accessing books that aren’t mainstream is difficult. Funding for translation is probably at an international all-time low, too.

BCP: As people who sing and write, do you see poetry and song related?  Has one helped the other?

Both: Yes and yes.

BCP: What advice do you have for young singers and writers?

Tune into BlackCoffeePoet.com Friday September 30, 2011 for a video of Zorras performing “After Going Out”.

Black Coffee Poet is a mixed race poet, essayist, and journalist who focuses on Social Justice, Indigenous Rights, STOPPING Violence Against Women, Film, and Literature.
View all posts by Black Coffee Poet →
This entry was posted in Poetry and tagged "After Going Out" by Zorras, "We Apologise For Any Inconvenience" by Zorras, Black Coffee Poet, feminism, https://blackcoffeepoet.com/, Indigenous Solidarity, Interview with Zorras, Palestinian Solidarity, Poetry to music, Sandra Alland, Y. Joesephine, ZORRAS. Bookmark the permalink.

1 Response to INTERVIEW WITH ZORRAS