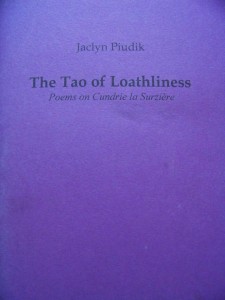 Chapbooks don’t get enough attention.  Only independent bookstores want to sell them, and sadly, such bookstores are disappearing faster than I can finish this sentence.  Poets do their best to sell them at readings and book fairs but they’re a hard sell!

Oldschoolers see chapbooks as the road leading to your first book.  In the intro to Jim Smith’s Back Off, Assasin! well known Toronto poet Stuart Ross writes about how young poets don’t want to make their bones anymore; he refers to poets not wanting to produce chapbooks before coming out with a first collection.  The critique is true of a lot of poets.

Many poets today haven’t even published a poem and they get a book deal!

Fooliar Press, a Toronto chapbook publisher puts out limited edition copies (50 to 100 of a chapbook) every year.  The Tao of Loathliness: Poems on Cundrie Surziere by Jaclyn Piudik is a beautiful chapbook filled with poems that explore different topics.  If you don’t read the title carefully you’d think you were holding a new age self help book: The Tao of Loneliness.

Loneliness may not be in the title but it is part of the book.

Published in 2008, Piudik’s poems are printed on smooth, thick, gray paper and enveloped in burgundy, krinkly wrapping.  The cover is purple, possible a metaphor for how deep you’ll go once opening the chapbook.

Appearing in The Columbia Poetry Review of Columbia College Chicago, The New Quarterly, and the recent anthology Crave It by Red Claw Press, it is no surprise that Piudik shows style, craft, and experience in her writing.

The title poem, The Tao of Loathliness, is heartfelt, refined, raw, philosophical, and a teaching.  Piudik pulls you in with her first line: “I never knew my mother”.  Mothers are so coveted you can’t help but read on and ask questions: Why? How?

Piudik challenges black and white thinking, “Rules are broken for gluttony, they taught me”, and writes of her contemplating such views describing them as “leprous koans”.

A rule breaker herself, Piudik writes her own proverbs, “Apples do not grow in tropical climates”, and writes of humanity’s darkness:

There is more than one way to know

More than one way to be

Why She Ate Her Hair, inspired by a 19th century photograph titled Stomach Encased in Hair about an anorexic woman who died from eating her own hair, is amazing.  The title is catchy, what follows is sad.  Using repetition, starting each line with “Because”, Piudik explores why this woman ate her own hair:

Because if she ate enough of herself

The pain in the poem is shown in every stanza.  Hunger, acceptance, thoughts on God, and questions of the universe follow one another as Piudik looks at why this woman would kill herself in such a way:

Because they accused her of being

and she thought she’d prove them right.

What is proven in The Tao of Loathliness is that chapbooks are still relevant and that Piudik is a great poet.  With several publications and a chapbook to her name Pidiuk is ready to put out her first book; I can’t wait!

Tune into Black CoffeePoet.com Wednesday August 31, 2011 for an interview with Jaclyn Piudik.