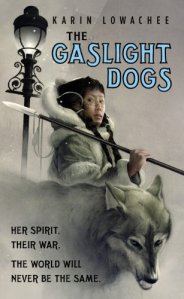 Before reading The Gaslight Dogs I thought the story to be of shape shifting. However after reading it, I realized the story went beyond shape shifting and even more complex then I could have imagined. This is a true journey into fantasy with a familiar tone of colonialism, culture, religion, politics, the search to find oneself, and the struggle to maintain one’s identity.

The Gaslight Dogs is based on two perspectives of two different people living in a world colliding with each other’s ways of life: the Ciracusan (Kabliw) army who are trying to gain control of the land and the Abo (Aniw) people who inhabit the land. The terms of the groups of people shift from whomever’s perspective it is. Sjennonirk is the femaleAkagago (Spiritwalker) of the Aniw tribe. She references the Aniw and Kabliw. Captain Jarrett Fawle is a Ciracusan military man who references Circacusan and Abo.

The story begins with the Aniw people being visited once again by the Ciracusan army that travel by ships to the North shores. Sjennnonirk realizes this visit is different from the rest she has seen because they have brought guns. Father Bari, a priest representing the church of the seven deiteies, has befriended the Aniw and tells her that the guns come on the army’s orders and there was nothing he could do to stop it.

“These Kabliw, these people of the boats, went where they would and did as they pleased” (pg. 1).

Sjennonirk is thrown into a foreign atmosphere of ship and of city when taken prisoner as a murderer. It is on the ship that Father Bari warns her not to speak of her spiritwalker ways. However she finds herself making a deal with General Cillein Fawle to gain her freedom by teaching his son about her spiritwalker rituals. General Fawle’s son, Captain Jarrett Fawle is reluctant to learn anything about the Abo as he refuses to accept them for who they are.

Jarrett is a man struggling with who he is. He despises his father and fights with his own racist views of the Abo people. Keeley, an Abo tracker from the Wishishian tribe is ordered by General Fawle to assist Jarrett and protect Sjennonirk. Keeley is a silent character but an important part of the story. A striking similarity to the residential school system in Canada comes into play when Jarrett meets Keeley and tries to figure out why he is helping and why he should trust him:

“Transplanted children, taken from their tribes and reared in Ciracusan schools. Not with Ciracusan children, though. The idea had been to tame them. Instead they had became merely trained and like wild beasts, they found ways to disobey” (Pg. 68)

Jarrett slowly discovers he may be more similar to these two Abo characters then he thinks. Jarrett disagrees with his father’s orders to communicate and learn from Sjennonirk. He simply wishes to return to the open field of his army’s position, where he feels more at home.

I was quite interested in the way Sjennonirk maintains her identity regardless of the obstacles she faced. She is not use to being locked up or wearing the Kabliw fabrics and she refuses to eat the unfamiliar food except for bisuits. Sjennonirk yearns for her freedom and the familiarity of home:

“Where do you think you’re going?” His voice approached behind She kept her eyes closed.

“I can’t breath here!” She let go of the gate and turned around, pressing her back to it, to feel the cool lines through the dress. Not quite like lying on the ice, but better than too much heat, the sticky pull of the dress when the day was at its height.

“Why can’t you breath? Just slow yourself down” He stood more then an arm’s length away, white-shirted under the gaslights, untucked as usual. He seemed not to care when the general was still away. He was unshaven and untrustworthy, and these were the first words he’d spoken to her in four days.

“Your World is a box.” She gestured up to the house.

“You live in boxes with lids. You keep yourselves in. This isn’t my world!”

By the middle of the story Jarrett is forced to relate to the Abo while trying to keep the trust of his army’s men. It is an uncanny turn of events. I was excited to learn about the teachings and skills of Sjennonirk and Jarrett’s cooperation. Throughout the book I felt a spiritual connection to Sjennonirk and an empathetic connection to Jarrett.

“They collected the children from the orphanage in the city-–a place where young ones without family were kept, an idea she did not understand. Why didn’t some other family take them in? with all the seemingly endless Kabliw in this place, why would children end up all in one house, with only a few adults to mind them and no family but each other?” (Pg. 314).

There is a mysterious and rebellious Abo warrior named Qoyotariz from the Soreganee tribe who leads his own army in protecting the land from the control of the Ciracusan Army. We are introduced to him during the first war battle and reintroduced to him towards the end.

As I got near the end of the book I was anxious it would end to soon and too short but was surprised at the intense outcome. It’s the making of a cliffhanger for a series of books. It’s amazing how Sjennonirk and Jarrett are two of a kind but with extreme moral differences. I wanted to read more and find out where the two characters end up.

It did not take me long to feel a sense of poetic writing in The Gaslight Dogs unlike any science fiction or fantasy book I’ve previously read. I was emotionally and visually drawn into the scenes and characters. I felt like the different scenery was painted with emotion as I read into the story. The implications of dreams and the use of tattoo art is unique. The story takes you into the minds of two people who are living in a world that does not know the word colonialism but lives it with an added fanciful twist to its definition.

Briana Stone is a Dakota Sioux and Plains Cree Native from Saskatchewan. She soughtresidency in Toronto, Ontario to attend post-secondary school for art. Establishing herself as a youth artist in the Native community, Briana assisted workshops, art projects and murals. She took some time away from art to pursue an education in community work, later to return to art. As an artist today, she has done work with animation, murals, graphic design and photography with her main focus on graphic design.

Tune in to Black Coffee Poet Wednesday June 1, 2011 for an inclusive interview with Karin Lowachee.