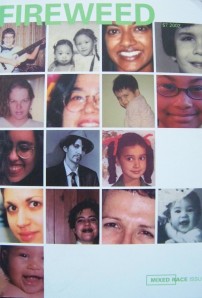 Being mixed race always has its challenges: isolation, language barriers, not fitting in, not being ‘enough’, and the many forms of racism that come with all that.

Every time I tell people that my mom is Peruvian and my dad is Lebanese I get:

One time a famous playwright of colour stroked my cheek and whispered “exotic” in my ear after I identified myself to him.

When I break it down even more (Mom: Indigenous/Spanish/Chinese + dad: Arab, moved to South America in his teens) I get the insult that people think is funny and acceptable: “you’re a mutt.”  It gets worse when I say my dad isn’t in my life, but I really don’t want to go there right now.

Reading FIREWEED #75: The Mixed Race Issue was not only fun it was refreshing.  Its contributors wrote about a lot of what I have experienced over the years; and they wrote from the heart, holding nothing back, and well.

Published in 2002 and guest edited by Lisa Amin, Leah Lakshmi Piepzna-Samarasinha, and May Lui, all mixed race women, FIREWEED # 75 was a follow up to a similar anthology, Miscegenation Blues (1994).  Amin writes in the intro, “This one is for the beige babies.”  It’s that and more.

Heinz 57 by Anne-Marie Estrada is my life story.  Except, I’m not Anne-Marie and she isn’t writing about me, she’s writing about herself.  A very short piece, Heinz 57 speaks to many of us mixies. Broken down into two sections, “HERE.” and “THERE.”, twelve questions Anne-Marie constantly gets are displayed throughout, many of which a lot of mixed race people get:

“When someone sees my name they think one thing.

When they hear my voice they think another.

Then they see my face and are mildly confused.”

Jesse Heart has two pieces in FIREWEED #75: Pinky Rant and Really Not Really.  Pinky Rant, a non-fiction piece, short essay really, possible Op Ed too, goes deep in a small space.  Heart explores race and gender and colonialism better than most academics in a concise, cutting manner.  Heart starts off with a solid slap to the ear:

“I think I am reaching a point of exhaustion.  I am tired of explaining…explaining my orientation…my identity as trans, as butch, as boi, as dyke.  Explaining my “origin”…?”

The explaining is tiring but not as bad as what Heart so beautifully calls “Colour fucking adjectives.”  Heart is referring to comments like “drunken native” when people find out about their Indigenous ancestry.  And then there’s the ogling on public transit:

“And if it’s not my “origin”, it’s the public debate I must witness, like on a fucking subway, “is that a man/dude/guy…or woman?…**giggle, giggle**”.

Heart shines again in their simple yet poignant statements in Really/not really: 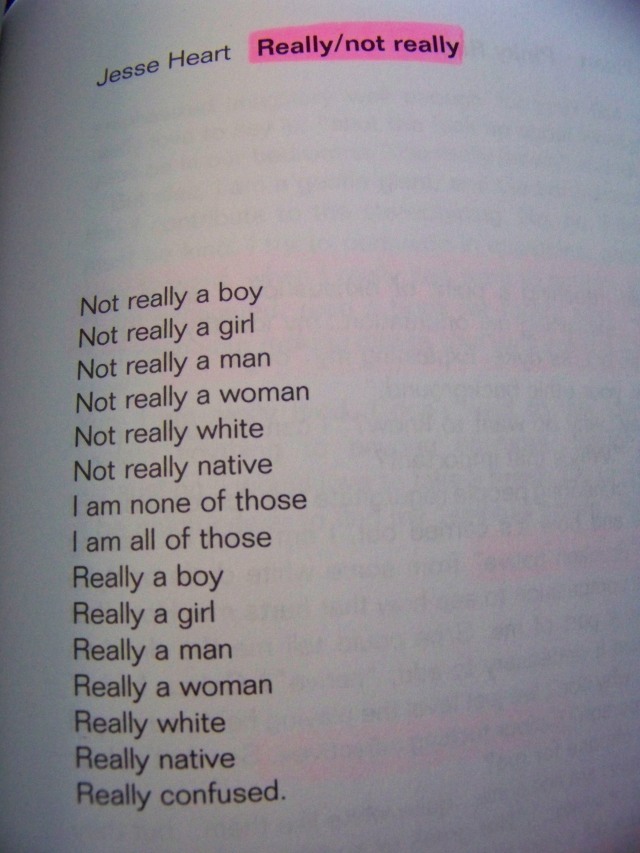 In her untitled essay, Lisa Weiner-Mahfuz (a half Arab and half Jewish woman) explores hypogamy, racism, the intersection of Zionism and racism, and the ever present racism in feminist/activist circles.  It’s deep, hard, honest, and sad.

As a half Arab who doesn’t fit in with the Arab community I love Weiner-Mahfuz’s essay.  And I can see why it’s untitled; some things can’t be named or labeled such as many experiences in mixed race life.

Being a different shade of brown, speaking Castellano (dialect of Spanish) and not Arabic, raised by a single mom, eating South American food my entire life, and using my mothers Spanish-colonial surname has left me outside of the Arab box.  Trying to explore my Arabness in university I joined the Arab Student Association (really a Palestinian solidarity movement that has gone through many names and is now Toronto’s biggest Palestinian activist group).  Although I met some good people, every problem written in FIREWEED #75 surfaced: questions and explanations, lateral racism, misogyny toward female members, colour fucking adjectives, tokenism etc.  Weiner-Mahfouz had similar experiences in feminist activism and at a race conference.

While recently talking with another mixed race friend (Native American and Black) about not fitting in with the Toronto Arab activist scene she said, “You’re too Indian for them.”  I prefer the word Indigenous, and I identify my indigeneity as Mestizo (Indigenous and Spanish; read Gloria Anzaldua for a much more detailed explanation).  But I got what she meant.  How can I relate to middle to upper class Arabs, who speak francais and Arabic, and hang mainly with other academics involved in activism, many of whom are white skinned and pass in the white world?  I grew up with Blacks and Latinos and Persians, all of colour, who’s parents, like my mom, worked in factories, restaurants, hotels, and as delivery people and taxi drivers and janitors.  I’m one of two in my crew who have gone to university; more of us have been incarcerated!  I don’t think that’s a coincidence.  And most of the friends I have, old and new, mainly of colour, have never heard of Edward Said, Ward Churchill, bell hooks etc.; and they don’t care to.

Weiner-Mahfouz writes of the exclusion she experienced in family circles for being both Arab and Jewish.  And she painfully writes of literally having a door slammed in her face at a race conference in Boston titled Race and Racism in the 90s:

“I raised my hand and asked where mixed race people were to go…The white women in the room, including the white facilitator, said they felt I should caucus with them because  I could pass for white.  Most of the women of colour concurred with this…

“The discussion proceeded with the facilitators spending ten minutes talking to the group about the privileges of being able to choose—as if I were not in the room…Finally, the group resolved that I could choose where to go…

“It was not resolved for me.  I felt alone.  I felt that regardless of where I chose to go it would be the wrong choice.  I felt like the illegitimate bastard child that no one wanted and/or knew what to do with.  Many of the women of colour were angry with me.  Many of the white women felt as if they had made an anit-racist intervention by challenging me on my racism.  Still as the group broke up, I made a choice and walked towards the room that the women of colour were to meet in.  As I approached the door it quickly slammed in my face.”

Not only do I believe that most of the contributors to FIREWEED #75, and most mixed race people, have felt like Weiner-Mahfouz, but they’ve probably had real doors slammed in their faces like her.  I understand where the women of colour were coming from but that was cold.  Weiner-Mahfouz’s experience at the conference was horrible and one that continues today.  And so do all the problems laid out in the journal.  How far have we come along?

Weiner-Mahfouz poetically states that as mixed race peoples we are feard:

Although we mixed race people are not considered whole, we are.  And FIREWEED #75: The Mixed Race issue shows that.

Tune in to Black Coffee Poet May 11, 2011 for an inclusive interview with FIREWEED # 75: The Mixed Race Issue Co-Editor May Lui.