DRIVERS AT THE SHORT TIME MOTEL 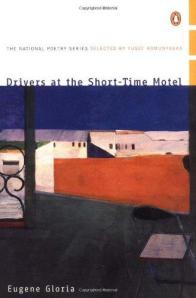 Drivers At The Short-Time Motel

Have you ever read a book that you enjoyed immensely and that left you thinking how much further you need to go as a writer?  With many poems in Eugene Gloria’s Drivers at the Short Time Motel this writer realized how much more he needs to learn, improve, read, write, re-read, and re-write…

Poets are called to submit to certain publications, write poems for special occasions, read at certain places, and give their opinion on certain topics.  Poets are also often killed when revolutions happen because they are the ones who speak out.  Gloria has much to say and has the talent and drive to express his views.  At the same time that he is in love with his Pilipino land and culture he is also very critical of them.  And his command of language and style bring his message further than your average writer who picks up a pen from time to time.

Like a good boxer Gloria pulls no punches.  He hits you hard with his first poem.  In Language is memory on the page; a language lesson during a love making session where he shares with this lover a teaching his grandmother gave him:

“every cultures worst enemy is it’s own people.”

Gloria recalls his lovers hair, breasts, then “the moon, sea and stars”, and the most important lesson he’s ever learned.  Like the first punch to land in a fight, Gloria sets the tone for his sharp, short collection.

Subic Bay, a one-page poem, floored this writer.  Images of American soldiers, army jeeps, third world vendors trying to make a buck, and as with all war started by white-imperialist regimes—the abuse of women of colour, this time a girl.

Gloria starts Subic Bay with, “At 12, Lita acts Imeldific.”  Twelve!  Imeldific is a term coined to describe Pilipino women acting high class, imitating their former leader/thief/dictator Imelda Marcos.  In this one line Gloria shocks you, saddens you, and teaches you a new word associated with the harsh realities of his war torn country that has a ruling class living the teaching his grandmother taught him.

Descriptions of Lita’s hair, lips, and dance moves take you to the club she works at where sailors by cheap beer (and more) and watch Lita on stage.  Gloria has your heart sink with one line, again, when writing of the sailor in front of Lita:

“who will not recognize the hopscotch girl

at the elementary school by the *PX.”

Gloria ends the dramatic poem with:

“In a nightclub, Lita worries

about tomorrow’s lesson when

she must conjugate the verb

Gloria not only shows his high craft of poetry, he shows that he speaks out against the war on women and children in our dirty world.  Gloria shows you he is an ally to women.  He critiques the men who ‘fight’ for his freedom as a Pilipino American while critiquing the country of his origin for letting girls like Lita dance on stage in front of grown predators in uniform.  Subic Bay is a critique of Euro-American colonialism and the oppressed becoming the oppressor.  The Lita’s of the world act Imeldific, never reaching their desired state, while being used by colonial forces inside and outside of their homes.

In The Maid Gloria looks inward at his own privilege.  His “polo shirt and penny loafers” show that he is part of the class that brings down his beloved country and lives off the backs of the girls like Lita.  While in a restaurant in Manila “where fresh air is as rare as tonic water” Gloria sees a “girl, no more than a child” order takeout for her employers.  Her “rubber slippers” contrast the “people clad in brighter church dresses and Sunday shoes.”  With less than one percent living like the cell phone carrying class (this was written in the 90s) Gloria wonders “would she vanish into a grain of salt among the nameless?”

Gloria uses his art to touch upon issues that many people of colour like to ignore, one being skin privilege.  In places like Asia, the Carribean, and Latin America, the light skinned folks are the ‘pretty ones’.  Those that are not light skinned uses creams, makeup, and bleach to attain such status.  Gloria’s Milkfish explores this reality.

Bravely, Gloria writers of his mother:

“You were the pretty one at seventeen,

your skin, white as milkfish.

The pretty ones, you said,

Were always given more food.”

“as a mestiza who equated liberation

with Hershey bars and grey nylons from American GIs—

and the season of the monsoon as dark as hunger

was not about suffering

but what you knew of beauty.”

Children of the ruling class are usually raised by those of the lower class who are low wage employees.  Gloria often writes of Conrado, the family driver.  There is a strong affection seen in the many poems that write of his father’s chauffer.  There is also the clear division of class: orders barked and followed.  To drive someone of Gloria’s father’s class is seen as a privilege in itself; still, you are no one in society and Elegy for No One is about this.

When Conrado, driver for many years to the Gloria’s, passes on, he disappears like the grain of salt Gloria writes of in a previous poem.  “There was no vigil, no ceremony, no service,” writes Gloria.  And like the hard-hitting one-liners throughout the collection, Gloria ends with:

Drivers at the Short-Time Motel is a fast read.  But if you want to learn what poetry is and what it can do you’ll take your time with Gloria’s first collection. It is no surprise that Drviers at the Short-Time Motel earned Gloria a spot as part of the 1999 National Poetry Series.  Read and re-read Gloria’s words, digest them, meditate on them, write them out, and enjoy the ride he takes you on.