My friend Brian has said many a time, “You only have one mother!”  He has his index finger pointed in the air as he leans in real close to your face while saying it.  Brian loves his mom.  It’s a feeling that rings true for many folk.  But not all people can describe their feelings in person, or on a page, as well as Cree/Metis poet Marilyn Dumont does.

Published in many literature journals across Turtle Island (Canada), Dumont is the recipient of the 1997 Gerald Lampert Memorial Award from the League of Canadian Poets for her first book A Really Good Brown Girl. 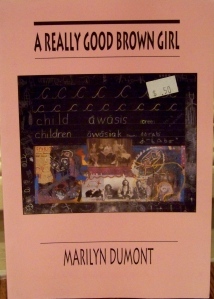 Dumont writes from experience.  At times she is bitter and angry but always truthful and always displaying technique.

The Cree poet is a resistance writer.  She exposes historical truths about the colony known as Canada with poems about the abuses of Aboriginal women at the hands of the colonizer in her collections. Dumont writes about things no one wants to touch or remember.  And she wins awards and fellowships while doing so.

Famed Chinese Canadian writer Wayson Choy once told me, “If you write well enough you will transcend their bigotry.”

Homeground, the first section of green girl dreams Mountains, is filled with poems about love for Dumont’s mother.  Poems with long titles bring you to the places Dumont’s mother lived and what she did in those places.  The titles give a hint of what you are about to read.  And the dense paragraphs of prose poetry leave you wanting to know more about the poet’s mother.

Mother, Ice Cream, Cigarettes, Newspapers, and Sin is a great poem.  You can feel the strong emotions and respect Dumont has for her lifegiver.  Dumont writes in the order of the times and places described in the title.  Many of her poems start with her mother as the title suggests. They move from one theme and action to another, literally, mother, ice cream, cigarettes, newspapers, and sin.

Dumont uses metaphor and description to show how “beguiling she can be, so sweet and yet so fierce, how these things can co-exist in one person, in one place, in one ice cream cone.”

You are with Dumont’s mother as she smokes, prays, and reads the newspaper.  The gifted writer has you sitting “at the end of” her mothers “bed” and seeing “her head slightly at an angle” as she reads her newspaper.  And you are with the poet as she eats an ice cream cone at “age forty” remembering her mother doing the same.  Remembering a parent happens to most of us; and Dumont knows how to bring such familiarity to her reader.

In Yellow Bird Dumont writes, “I was fixed to her            adored her like pollen.”  Later, in the place you left open the poet remembers her mother during a reading, how she spoke Cree, and how she was weak, barely holding up her dangling head a month before dying.

City View, one of my favorite sections in the collection, is filled with descriptions of Vancouver’s Downtown Eastside.  Having the opportunity to visit the poorest postal code in Canada I remember what I saw when reading Dumont’s poems.  Whether you’ve been to Main and Hastings or not you can see the deals, dirt, and destruction that Dumont writes about.  And you know that Dumont is not writing from a top down position, it is writing that takes you where she’s been without judgment, something that you don’t find much in the poetry that likes to romanticize the poor and act as voyeurs on a trendy, dangerous, weekend vacation.

Dumont’s fairness in her descriptions is something that should be taught to many aspiring poets.  What is missing in City View is the sounds and smells of all she writes of.  Coffee, pizza diners, transit tunnels, peoples from different communities, are written of without aromas or screeching tires or the languages that make up the scenery and time.

green girl dreams Mountains is the second collection of three and I hope many more to come. Dumont has you in bed with her.  You want the poet to whisper those dreams in your ear, have them tattooed on your brain, and never wake up. 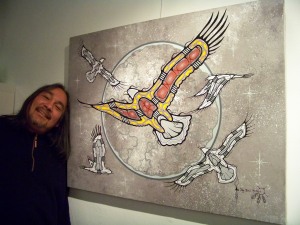