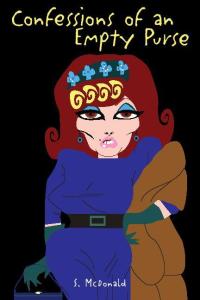 CONFESSIONS OF AN EMPTY PURSE

Part way through the S. McDonald’s book of poetry Confessions of an Empty Purse I said to myself, “Do we really need another transition narrative?” The corpus of literature related to trans issues are littered with transition narratives. *Cis people are inordinately interested in our transitions. What did we look like? What were our real names? When did we first know? It is as if we are summed up by our transitions, that who we are is not as important as who we “were”. That being said, I do not want to underestimate the healing power of sharing one’s narrative. It is often necessary for tans folk to share their stories in order to facilitate their healing.

Regardless of the ethics of transition narratives McDonald’s words paint a picture of growing up differently gendered in Toronto in the 1960s and 1970s. In *zir first poem, Transsexuals On Parliament, we see the trans women walking down the street in fur and stilettos or shopping in Loblaws or arguing with zir boyfriend in the convenience store. Or, in Our Lady of Playtex it is easy to zir secretly putting on zir mother’s girdle in order to fit into zir confirmation robe so that ze would

at least be able to zipper

that fucking robe up and able to sit down in church

without bursting out of it like an overstuffed Wardinski sausage.

It is beautiful to see how when presented with a robe that is too tight McDonald’s solution is to don zir mother’s girdle. While it does solve the problem it also allows zir to go out in public wearing an article of clothing that only women are allowed to wear. Zir path to solving the problem is to express zir femininity as much as *ze is able.

McDonald paints zir pictures often through prose rather than verse although zir verse cane have a frenetic power as it trips over the page like in Transsexuals On Parliament when ze sees the possibility of actually living as trans woman:

Here, McDonald’s imagery creates great pathos. We feel zir desire to express zir womanhood. In the verse above ze captures the feelings that one has when one finds out that one is not alone. The wonder and possibilities when one sees a real live trans woman, that there are trans women on Parliament Street in Toronto not just in the media.

But it is not necessarily McDonald’s gender variance that challenges us the most. In fact it is zir treatment of suicide that McDonald really shines. Zir one line poem Slip exposes the intersection between suicide, unrealistic body images for women, and the trap of passing. When ze writes:

I want to be as thin as the scars on my wrists.

You see the scars on McDonalds’s wrists from a suicide attempt. You feel zir desire to be “as thin as the scars on my wrists” that speaks to the societal construct that the right body for a woman is a thin body. One is reminded of all the average sized women who feel fat and the need to lose a few pounds. Or, all the fat women who face the oppression of fat phobia on a daily basis.

But there is also the notion that in order to be a real woman a trans woman must be able to pass. That those of us who consistently get clocked as trans are somehow lesser than those who do not. In this one line we see how the pressure to conform to society’s obsession with thinness cause death.

While McDonald’s prose paints such vivid pictures, zir verse with its frantic quality, always near the edge, is what can take the breath away. Perhaps it is the essentialist in me that might like to see a collection dedicated to more verse and less prose.

In this week leading up to Transgender Day of Remembrance as we trans folk remember our dead, not only the trans sex workers of colour, but all those who commit suicide, those who suffer through poverty; perhaps this transition narrative can contribute to healing. Not simply McDonald’s healing but healing of the world. Because McDonald’s despair is not due to zir gender variance but rather the oppressive systems that do not allow people who are differently gendered live their lives as they really are. Because S. McDonald is perfect the way ze is created; it is the world that is broken. Perhaps Confessions of an Empty Purse can in some small way heal this broken world.

*Cisgendered: The opposite of transgendered, someone who is cisgendered has a gender identity that agrees with their societally recognized sex. Many transgender people prefer “cisgender” to “biological”, “genetic”, or “real” male or female because of the implications of those words. Using the term “biological female” or “genetic female” to describe cisgendered individuals excludes transgendered men, who also fit that description. To call a cisgendered woman a “real woman” is exclusive of transwomen, who are considered within their communities to be “real” women, also.

Cindy Bourgeois is the first known out and proud trans person to be ordained to ministry by a mainline Christian denomination in Canada. On this coming International Woman’s Day ze will “make [zirself] a eunuch for the sake of the kingdom of heaven. Let those accept this who can”, (Matthew 19:12).

Please read a review of The Marrow’s Telling by Trans poet Eli Clare.

Tune in to Black Coffee Poet Wednesday November 17, 2010 for an inclusive interview with S. McDonald conducted by Reverend Cindy Bourgeois.