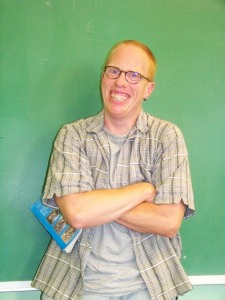 Eli Clare Talks Trans Pride, Disability and the History of the Freak Show

As Eli Clare stood among a crowd on Church St at Toronto’s Trans March this year, his smile reached from the top of Bloor St to the bottom of Carlton St. Dressed in his usual button-up shirt, runners and backpack, you could see Clare was content among kin.  Always a positive person, Clare’s smile was one of joy, satisfaction, victory and long-overdue recognition.

“Pride has a long history going back to the Stonewall riots in New York City, which was led by trans people of colour. So to have a Trans Pride parade now, 40-plus years later, is a way of saying, “trans people are here and part of this community. And in a way, that’s been a real struggle to be part of the LGB community,” says Clare.

Clare’s life has been one of struggle but also an example of how to thrive through surviving adversity. His hard-hitting poetry collection,The Marrow’s Telling: Words in Motion, reveals a narrator with a disability who was sexually abused by his father for years, his life as a white trans person who became a disability activist, and his growth in becoming a strong ally to indigenous peoples and people of colour. His third, and most recent, trip to Toronto was one of business, celebration and the feeling of coming home to one of his beloved communities.

“Trans Pride is a way of saying, ‘We’re here. We’re here not just as individual trans people; we’re here as community.’ Community means allies, means families, means partners in addition to trans people,” says Clare. One of his fondest memories of Trans Pride 2010 is seeing a sign that read, “I’m family to a trans person.”

“I adore Toronto because there’s a great queer community here. There’s also a really big, local disability community, as well as a really radical community: to mobilize 25,000 activists on the street for a weekend of protest [the G20] is amazing,” says Clare.

Horror stories of disabled people hidden in backrooms or tortured in medical facilities are a large part of why Clare fights for disability rights.

“Isolation is built into ableism.  Part of ableism is the isolation of people with disabilities,” says Clare. “Where I live in Vermont, I know five disabled people — five disabled people who call themselves disabled, who have some politicized notion of what that means.” Clare cherishes the experience of spending time with many disabled people in Toronto.

“There aren’t many places that have a real concentrated population of politicized disabled people who have enough access to be able to spend time together,” says Clare.  Not only do disabled folk in Toronto have more access than many other places, there is also a great dynamic of able-bodied people interacting with, dating, befriending and supporting disabled peoples. Clare describes Toronto not as a utopia but as a place that has many things to teach other cities.

In Toronto this summer on a two-week contract with Ryerson University’s Disability Studies Institute, Clare taught a course named Freak and Bodily Difference Using Disability as a Lens: essentially, the history of the freak show.

“The freak show’s not just a thing of the bad old days; there are parts of the freak show and dynamics from the freak show that still really influence today,” says Clare. With trans people referred to as freaks, Clare teaches from lived experience.

“When I was walking at the Trans March, I was thinking about how much has changed in 40 years and how much hasn’t,” said Clare.

Tune in to Black Coffee Poet Friday September 24, 2010 for a video recording of Eli Clare reading his amazing poetry

Come support Black Coffee Poet as he reads at the launch of DESCANT 150: Writers in Prison

2 Responses to INTERVIEW WITH ELI CLARE