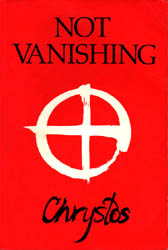 I first read about Chrystos in REDWIRE Magazine.  She was listed as one of the top ten Indigenous writers you have to read as an Indigenous person.  I remember the photo of  the cover striking me: a red background with a white medicine wheel and the words NOT VANISHING written above in black with her name written in black below.

Book covers are what attract readers.   Good titles do the same.  Chrystos had both in her first collection of poetry.  And what followed inside matched its outer form.

If it were not for Chrystos I doubt I’d be a poet.  Reading dead white men in school bored me.  Not understanding old English was frustrating.  The content in English lit anthologies had no relation to me.  I found myself many a time saying, “I hate poetry!”

“Find writing that speaks to you,” is what one of my mentors, Daniel Heath Justice, advised me on several occasions.

After reading about Chrystos in REDWIRE I literally found her: not in a used bookstore; not in an activist space; not even at Toronto Women’s Bookstore.  I found Chrystos at the First Nations House library years after visiting the space daily during university.

After seeing her book on the shelf, holding it for a while, looking at the cover, and reading some of the poems, I ran home to my stack of REDWIRE mags.  I looked for the list, mainly looking for Chrystos and her awesome cover, and there she was!  It all started from there.

Not Vanishing, my version of the Red Book, is autobiographical, challenging, confrontational, educational, sad, has poems in translation (Spanish to English), and leaves images with you, for life.

Stoh:lo writer Lee Maracle has often said to me, “Poetry is song”.  I’ve been taught by different Elders that song comes from Creator.  Chrystos sings sad songs, protest songs, songs of hope and rage, songs for change, songs that echo, songs of survival, songs that follow your heartbeat.

Chrystos’ poem In The Brothel Called America is a story, a song, a prayer.  To use her own words found in the poem, Chrystos “takes us on a journey of defeat”.  Descriptions of spoons used to heat up heroin, arms full of bruises and scars, the image of hitting what addicts call “rock bottom” are written in the poem/prayer.

“Pray for her” says Chrystos to her reader.  “Let our voices lead her to another way.”

Almost midway through the collection, In The Brothel Called America is about many women, not one.  After reading the critical and dark poems that precede it, you know Chrystos writes of her life and the lives of her many sisters of colour: red, black, brown, queer, poor, third world, isolated, dead, forgotten.

America and its false dream are exposed throughout Not Vanishing.  The brothel, still open today, is in need of a prayer just as much as it did twenty-two years ago when Not Vanishing was first published in 1988.

Chrystos uses clever word play to inform her reader of who she is critiquing.  Her prayer for her sister(s) is genuine and not found on faultfinding.  Although showing us her sister’s addiction and the lies that go with such a life, the Menominee poet uses biblical reference while practicing the empathy found in her spirituality: “No judgment in this lake of fire.”

Chrystos ends her poem/song/prayer by showing us some of her spiritual belief:

Stars give her strength

We pray for her

We sing for her

We drum for her

Most of Chrystos’ work points out the negativity that exists in our world.  Her poems look past first appearances.  Her words don’t just go to the root of a problem, they dig them out, hack them to pieces, separate them for dissection, and then display them on the page.

My Baby Brother and Vision : Bundle are placed beside one another in the collection (pgs 20 and 21).  Whether this is done purposely or not, the two poems compliment one another.  Again exploring the life of an addict, Chrystos writes of her brother’s riding the white horse—heroine—“my rent went up his arm…kills the pain of a white fence world        hard walls world   eat or be eaten world…his arms a map of war”.

The war Chrystos writes of is what the cover of her book tells: her people, Indigenous peoples, are not vanishing despite the continued attempts of colonial governments to erase them.  Vision : Bundle describes the taking away of language, killing of Mother Earth, and the perception of Native peoples by the world: “they say we are vanishing”.

“They have our bundles split open in museums

our dresses and shirts at auctions

our languages on tape

our dances on film”

I Walk In The History Of My People follows the same theme.  Chrystos describes the aftermath of invasion that her peoples endure daily; yesterday, today, hopefully not tomorrow:

“In my marrow are hungry faces

who live on land that whites don’t want.”

The poem is short but uses the techniques seen throughout the collection: tabs (spacing) instead of commas; repetition; and clever play with words.

The pus of the past oozes from every pore

This infection has gone on for at least 300 years”

The poet is referring to The Wounded Knee Massacre that happened 300 years ago.  The pus, the infection, are the after effects of genocide, colonization, the reservation system, the poverty seen through much of Indian Country.  Pine Ridge Reservation is still the poorest place in Amerika today.

“Anger is my crutch      I hold myself upright with it

My knee is wounded

How I Am Still Walking”

There is anger in Chrystos’ poetry.  Can you blame her?  Often, the anger in Chrystos’ writing is talked of in black and white terms.  Yes, Chrystos is bitter and angry.  At the same time, not all anger is corrosive.  There is a productive anger that people forget about.  Productive anger has seen people of colour fight and win for their right to sit at the front of the bus; end the residential school system in the stolen land called Canada; and forced restaurants to remove such signs as “No Mexicans Allowed” throughout the U.S.

Chrystos writes, and holds herself up with, different forms of anger in different situations.  Corrosive anger blinds people from thinking and acting rationally.  The poetic technique displayed in Not Vanishing shows a writer who thinks clearly before expressing herself; outbursts of ‘hysteria’ (a favorite word used by misogynists and racists) are not seen in Chrystos’ collection.

There is also bravery displayed in Not Vanishing that you don’t see in conventional poetry.  Bitter Teeth shows us years of sexual abuse.  As is common, a relative, in this case an uncle, abused Chrystos.  There are graphic scenes written accompanied by honest, understandable, sentiments.

for your funeral         Only place safe to see you again

I’ll spit in your face for once.”

Chrystos’ bravery also extends outwardly through her challenging of white feminists, police, and the President.

Maybe We Shouldn’t Meet If There Are No Third World Women Here takes the reader to a place all too common in activist circles and Women’s Studies classes: white people excluding people of colour, in this case, white women excluding women of colour.  This has been a problematic practice that has continued since before Sojourner Truth challenged white women in 1851, since bell hooks wrote Aint I A Woman, and since “Not Vanishing” was published.

Chrystos calls out white women on their racism: “How can you miss our brown and golden in this sea of pink     We are not as many of you

But we’re here              You’re the ones who called a community meeting & didn’t contact the Black Lesbians or G.A.L.A or Gay American Indians or the Disabled Women’s Coalition”.

Later in the poem Chrystos asks a question related to how people of colour and people with disabilities are often looked at many times in society.  It’s a reference to that stare you get when walking in a public place that has few, if any, people who look like you.  “Do you think we are martians” [?] asks Chrystos.

Toward the end of the poem Chrystos uses repetition like a four punch combo:

In There Is A Man Without Fingerprints, a poem about a serial killer targeting women, Chrystos points out one of the many hidden practices of police.  “The police    who don’t like to be called pigs       are keeping him under wraps.”  Chrystos shows you who, where, when, and how the killer kills, and why he is able to do so.  She doesn’t mask what happens by using terms like sexual assault; she names what happens, “tortures        rapes                murders”, and describes scenes before, during, and after the crimes.

With such truth in what she writes, Chrystos states:

Dear Mr. President is a must read.  Written thirty years ago, the problems shown in the poem sadly persist today.  The poem should be sent to every world leader.

The battered women’s is full & so is emergency housing

The worker said she’d already turned away 378 this month

There is an emergency in our world.  Twenty-two years ago Chrystos wrote about racism, genocide, violence against women, poverty, and homophobia.  Much has changed, but how much?  How much more needs to change?  Native Americans are still the poorest population in North America; the hunting of Mexicans is now law; rape is an accepted part of our culture; banks are bailed out while children starve and lose their homes.

We need poets like Chrystos who venture into the dark, bring it light, and show readers what is really happening in our homes, on our streets, in our world.

Poetry, often ignored, is seen as something of the past.  It is not published or taught enough, and the poets who are taught and published are of the dominant class.

Poetry is also in a state of emergency.

Chrystos might not have come out with a book in a few years.  She might not be, and probably never will be, taught in ENG 100.  She might even be off the ‘activist’ and ‘Native ally’ radar.  But she still lives up to the name of her first and always important book: she’s Not Vanishing.  Never was, never has, never will.

7 Responses to NOT VANISHING