HOWLING IN YEAR 3 WITH NIK BEAT AND ROBERT PRIEST

Howling In Year 3 With Nik Beat and Robert Priest

About a month and a half ago I got an email from Nik Beat saying he wanted me on his show.

It literally read, “I want you on my show!”

Poetry to my ears.

My response to Nik was a proposed date for September 18th as that was my 2 Year Anniversary of starting and running blackcoffeepoet.com.

“You’re booked,” he wrote back.

HOWL is named after the famed poem by Allen Ginsberg.  It’s not only a catchy name it’s also a tribute to one of the greatest poets that ever lived.  So, being invited to read on HOWL was a big deal for me.

The show starts at 10pm and Nik said to get there at 9:45pm.  We both arrived at 9:30pm.  I like to be early for things like that.  My plan was to take a few photos with Nik and set up my tripod and camera to videotape my time on the show.

After smiles and introductions (Nik was kind by introducing me as “Black Coffee Poet…  He has a large following.”) to his tech guy and Laura L’Rock Nik got to work.  He started setting up the show on paper.

“You’re on at eighteen to eleven,” said Nik.

Babs Martin and the great poet Robert Priest were on before me.  No worries.  I’m new to the game and I respect my elders.

“I’m on with Robert Priest!” I said to Nik when I found out.

It’s funny how only writers and real readers get excited about other writers.  We are a small world within a small world filled with many small worlds.  Torontonians in the poetry scene know Priest.  I’m sure many other readers and writers in Ontario know Priest, and possibly other Canadians know Priest.  But poets never get the credit they deserve and are minor celebrities, if that, in their small circle in the cities where they live.

Nik smiled at my elation.

Priest came in and we all shook hands.  I’m Face Book friends with Priest so he knows me from the internet.  Now we were face to face. 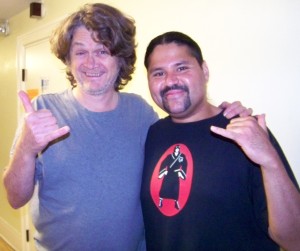 Priest was relaxed and humble.  He wore faded jeans, black runners, a grey t-shirt, and sported wavy brown hair with a little white fighting it’s way to be seen around the edges.

We chatted poetry and writing.  He was surprised that I wrote essays for some reason.  And I shared with him my idea for my forthcoming chapbook.  Having a seasoned poet in front of me I took advantage by asking questions.

“Got any advice for me about putting out a chapbook?” I said.

“Make it legible.  Make it look good.  Make it so when people see it they want to read it,” said Priest.  “Elegant.”

Priest shared that his first collection was 80 pages and self published in 1977.  I plan on my chapbook being 10 to 12 poems.  And of course, it will be self published.

“That’s a good length.  People will read it,” said Priest.

The Babs Martin interview finished and Priest was up.

Laura L’ Rock and I entered the studio to see Nik and Priest in action.  They howled, laughed, listened to Priest’s new CD The Pinch, and talked about poetry and song.  Fifteen minutes flew!

In between Priest’s set and mine I set up my camera.  As Priest walked by I said, “I’ll be reading a boxing poem.”  Priest had shared his love for boxing with me in the hallway.

I sat beside Nik and watched him do his thing.  All cool on the mic you could tell Nik’s been at this for years and he loves radio.

After the intro and small talk Nik jumped in with a question:

“Why the name Black Coffee Poet?”

“It’s pretty simple.  I drink Black Coffee and I’m a poet,” I said.

Nik asked about my mixed identity and let me promote my site and YOUTUBE Channel.

“We’re gonna cut right to the chase,” said Nik.  “I want to get right to the poetry.”  He asked me to read some poems.  It is a poetry show after all.

Being on a new show brings a new audience.  I decided to read my first published poem, A Poem For Mayor David Miller, about violence against Aboriginal women in the land now known as Canada and how police and government are doing nothing about it.  The poem was published in August 2008 in the Toronto Star newspaper.

Many of my readers and Face Book friends know the poem but I thought of the new people that might be listening and I wanted them to know what I write about and what blackcoffeepoet.com is about.   My poem for the former Mayor of Toronto sums it all up. 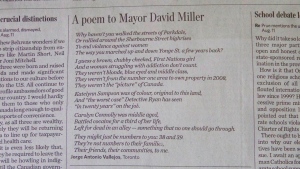 I followed my first poem with one called You Look For Your Own about the second time I went to jail.  When incarcerated you tend to hang with your people—ethnic group and colour.  That’s what this poem is about.

Nik asked me a few questions after I read.  Why do I write?  Is writing cathartic for me?  And then we chatted boxing for a bit.  It was a good lead in for my poem Chico for deceased boxer Diego “Chico” Corrales (1977-2007).

After a short outro where Nik asked me to let people know about my site and YOUTUBE Channel we signed off the air.

“Cool man!” said Nik as he put his hand out to shake mine.

We discussed possible dates for me to be on again as we packed up.

Robert Priest was waiting outside.  He shook my hand, complimented me, and said, “I have a poem about Ali that you’ll like.”

Laura L’Rock let me know that she loved the first poem to our former Mayor.  And the radio hosts of the next show, Sex City, shook my hand and showed appreciation for my words also.

What a great night!

Year 3 of blackcoffeepoet.com started out in a much different way than I expected: with a howl.

The see the show in it’s entirety tune into BlackCoffeePoet.com this Friday September 21 for the video.