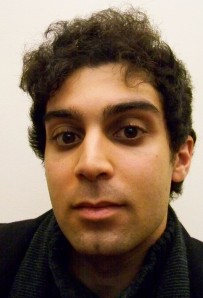 Adam Abbas is an author of literary fiction and the poetry chapbook A State, A Statue, A Statute.

Adam has been a featured poet at the Plasticine Poetry Series, the Underdog Poets Academy, the InkTank launch reading and the Secret Handshake Art Gallery. He’ll be featuring at the Art Bar Series on April 17th. He recently received his Honours BA in English from York.

BCP: Why did you choose to write poetry as opposed to other genres of writing?

AA: I write fiction as well.  I wrote a screenplay.  I’m writing a play.  I write.

But there’s no doubt that poetry is essential to my growth as an author.  I felt I needed to adopt a pretentious, narcissistic, confusing, exclusive form of art which people have no interest in just to pretend to myself that I have the upper hand on the masses.

And of course, I’m completely joking.  Poetry is integral to literature and in some ways more challenging to write, and to try and shape it into work that I’m satisfied with is what I enjoy.

BCP: How long have you been writing poetry?

AA: I’ve been writing poetry since I was five.  My first poem was called The Beach Poem.  But I was mainly reading and absorbing fiction, as I did since I was old enough to read.  From Roald Dahl to Douglas Coupland.  That was a golden age in my life, from 8 to 12.  I tried to read everything I could.  I liked giving speeches as well, I still love public speaking.

Then, when I was 19-20 and working as a dishwasher, I rediscovered poetry.  I still have my attempts at poetry during that time on my computer. No one will be seeing them. The only good ones are those which I performed onstage, but I have future plans for those.

BCP: Can you tell me something about the way you write a poem?

AA: It can be anywhere, at any time.  But the main thing is that I do it, or at least think about it. “Don’t talk about it, just do it.”

Patrick Lane once said that he writes early in the morning, standing up I believe…I couldn’t do that.  It must help him.  I like his work.

AA: I don’t have anyone directly influence my work.  It’s never been, “I want to write exactly like him or her.” I keep my own voice.  But I do like to read some of the work of Khalil Gibran, Charles Bukowski , Dylan Thomas, Elizabeth Gourlay.

The artwork of Jeff Wall, David Plowden,  Nan Goldin, Jean-Michel Basquiat, the Dadaists, Bill Watterson, Gary Larson, etc.  Yet I still continue to wear clothes with logos on them.  But one quality in a person doesn’t rule out any other quality…

BCP: Your poetry gives me the impression that you are very well read.  Can you provide a short recommended reading list for people?

AA: I’ve read a lot but I wish I was more well-read…maybe everyone thinks that.  And maybe with the advent of the internet, it’ll be a continuing lament. I’ve seen graffiti which says, “Read more books”, but not one that says, “Look up more internet.”  Yet for some reason books are placed, in rows, on public streets and benches, for free?

Anything by the authors and artists I mentioned previously is worth looking up.

BCP: What are you reading now?

AA: Currently I’m reading Your Money, Your Brain by Jason Zwieg, Story by Robert McKee, and The Official MTO Motorcycle Handbook.   I recently bought my first motorcycle, a 1985 250cc Honda CMX.  It’s the best bike to learn on, give me a break.

BCP: Your poetry touches on tough themes such as war and love. What do you try to convey to your readers?

AA: Keith Haring said of his work that he was just the middleman, that he gave the audience the freedom to create their own interpretation of his work. But then William Spenser said of The Fairie Queene that there’s a specific meaning which the reader has to understand.

I guess that’s the constant struggle.  How there’s a line between wanting (or needing) a reader to understand what your point is, and not wanting to deny them the freedom to take their own meaning away from it. Even the theme of war, I never thought that was a recurring theme in my poems.

BCP: Your chapbook has different forms of poetry: haiku, villanelle, and prose poems.  Do you have a favorite form?

AA: No, I like all forms.  I’d like to write a double sestina, even though apparently it’ll drive you insane, like reading Finnegan’s Wake.  Although I sincerely doubt that’ll happen.  It’s just a long poem.  Anybody think otherwise?

BCP: When people find out that you are Arab and a poet do they immediately mention Khalil Gibran and Mahmoud Darwish?  If so, are you tired of that?

AA: It’s actually never been a topic of conversation, it never came up.  It’s more than likely people are trying to figure out which ethnicity I am.  I don’t seem like I came out of the movie Executive Decision, haha.  A lot of Arabic people I’ve come into contact have acted like assholes as well, sad but true. That’s definitely not a stereotype, but they should understand the ramifications of their behaviour.  I don’t act like an asshole.

I once asked a professor from UC Berkeley if Darwish was influenced by Gibran, and he said, “Not to my knowledge.”  Then he said, “That’s a good question, I’m going to look into that.”  Maybe he was?

BCP: Why did you name your chapbook A State, A Statue, A Statute? 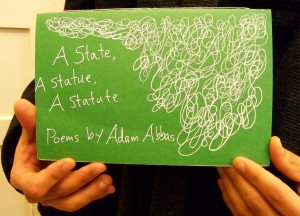 AA: It just sounded good.  It bears a resemblance to bp Nichol’s phrase A Lane A Line A Lone.  Which some might think would contradict my statement of keeping my own voice, but I don’t write exactly like Nichol.

BCP: How long were you working on the poems featured in A State, A Statue, A Statute?

AA: Two of the poems were from two to three years ago.  But the majority of them were written in the last year.

AA: No, no more vanity publishing. Because that’s all self-publishing is, vanity right? And the destruction of standards, there are too many books already!

I get worried that’s how people and publishers think.  Self-published = lack of talent.

I don’t know how to explain it.  I’ll just say that, if you develop a sharp sense of style and work hard on poetry or literature and learn about poetry and literature, and over time believe that you can honestly bring effective and compelling writing to people, then self-publish and take the initiative, then people will notice.  That’s what some of the most well-known authors have done.

If you’re writing for fame and money then give up. It bothers me to hear poets and writers talk constantly of how much money they’re projecting to make off their investment in literature, how many units they’ve moved.  It’s sad to hear people exclaim “I wanna be famous” when it comes to writing.  A lot of people do take the self-publishing route in order to do so. Just go.  Go do something else.

BCP: Some old school poets feel that young poets these days skip the right of passage of the chapbook and go straight for a publishing deal.  Do you see the chapbook as a right of passage?  Why did you choose to put a chapbook together as opposed to waiting for enough material to put a full-length collection together?

AA: I think it’s a rite of passage.  It’s all natural.  A person’s writing needs to grow and chapbooks definitely provide a goal to work towards.  I made my chapbook for a couple of people at first.  I eventually sent chapbooks to them and obviously kept producing chapbooks for everyone in Toronto as well.

BCP: We met at one of your first readings.  Have you been doing lots of readings?  How do you see readings helping a poet grow?

AA: I’ve been doing many readings. I’m always around Toronto, on April 17th I’m reading at the Art Bar Poetry Series.  I’ve been going onstage and reading for six years now.  I’ve met a lot of good people though it.  I’ll see my friends, I’ll bring my girlfriend, she’s a huge support.

It can be painful sometimes, there are some people whose work is hard for me to listen to. Some slam poets, some fixed form poets. Nobody I know, but it still happens.

I think readings can, maybe this sounds corny, but give someone a stronger sense of self-awareness which could in turn help their writing.  Chekov said, “All I need to know about human behaviour I learned from me”, and reading onstage can help that, at least it has for me.  I would like to say though, that when you read onstage, pause before you read a poem and after you finish reading it.  Don’t finish reading it then immediately lapse into the second one.  Just give the audience time to digest your work.  I’m not a perfect reader, but I always notice that.

And there’ll always be some people sitting in the back who are acting supercilious, but pay them no mind.  It’s their problem, not yours.

BCP: What advice do you have for other poets out there thinking of putting together a chapbook?

I think that less is more in terms of chapbooks. If you make the most luverly designed chapbook but the poetry is sub-par you won’t trick people into thinking your writing is great.  At least I don’t think so, but then there are always some people who fall prey to that.  There’s a saying, “If people want to be victims, let them.” But that shouldn’t translate into poetry; poetry and literature as a whole should always be synonymous with integrity.

Tune into Black Coffee Poet Friday March 9, 2012 for a video of Adam Abbas reading his poetry.